watch 01:23
What are the Four Horses of the Apocalypse?
Do you like this video?
Play Sound

The Four Horses of the Apocalypse are some of the mythical creatures unleashed in the Red Dead Redemption Undead Nightmare DLC pack. They are War, Famine, Pestilence, and Death.

These four new mounts can be found and broken by John Marston, although Death is additionally awarded upon completion of the "On a Pale Horse" quest. Each of these mounts are faster and tougher than a regular horse or undead horse. If the mount is killed or John Marston breaks a different horse without retrieving and hitching the original one, the mount cannot be directly recalled until Marston completes Rank 5 of the Four Horses of the Apocalypse Challenge. Completion of the challenge awards Marston with "Blood Pacts" for each of the Apocalypse Horses, functioning exactly the same way as horse deeds. However, Death's Blood Pact is automatically acquired upon breaking him or receiving him at the end of the game.

By default, all mythical mounts have unlimited stamina and extremely high health. However, any mythical horse can still be killed from direct damage to the head or extremely long falls.

Note: If fed horse pills, these mythical horses will lose their unlimited stamina.

Mortality aside, each of the Four Horses of the Apocalypse possess somewhat unique attributes and physical characteristics, making them easy to discern from one another; as well as from normal and undead steeds. They are summoned via Blood Pacts in lieu of proper deeds. Each Blood Pact bears a brief description of the horse to which it applies. Those descriptions are transcribed below, in the order in which the Blood Pacts are arranged in the player's satchel once they are awarded:

When one of the horses or another mythical creature is nearby, a blue circular area will appear on the mini-map along with the notice, "A mythical creature has appeared in the area." Unlike other mini-map notifications, however, the blue circle covers a large area and does not move with its target. In other words, the target may escape outside of the blue circle at any time, thus decreasing its likelihood of discovery.

After a mythical mount's apparent death or loss (prior to obtaining their Blood Pact), it is possible to find each Horse of the Apocalypse again in the wild. Unfortunately, the notification and blue circle on the mini-map will not accompany the mythical mount's appearance after they have already been broken once before.

Common discovery locations are listed on the individual articles for each horse, however, these are only guidelines as their locations vary randomly. 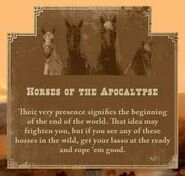 Description for The Legendary Horses of The Apocalypse.

From left to right: Death, Famine, War and Pestilence

Completion of Four Horses of the Apocalypse Challenges contributes towards the acquisition of the following Trophies/Achievements:

Retrieved from "https://reddead.fandom.com/wiki/Four_Horses_of_the_Apocalypse?oldid=403729"
Community content is available under CC-BY-SA unless otherwise noted.