Francis Sinclair is a minor character featured in Red Dead Redemption 2. He initiates the Stranger side-mission "Geology for Beginners".

Francis Sinclair was born in 1898/1906 to Tom and Mrs. Sinclair. His father died a year before he was born, leaving his mother to raise him alone.

He originally lived in Hawk's Eye Cabin outside of Strawberry with his mother during his youth. At some point, he moved to New York City and lived an affluent life.

Francis Sinclair is first met in a modest cabin outside of Strawberry and shares his story of hunting for rock carvings throughout the world. He states he will pay a good price for the location of all ten, but remains cryptic with the player about his reasons for asking.

After the player sends him numerous letters highlighting the rock carving locations, Francis invites them back to his cabin, but will be mysteriously absent. In the closing scene of the quest-line, a woman appears in the cabin carrying a ginger-haired baby also named Francis, bearing an identical birthmark over its right eye. After the protagonist expresses their confusion over the situation, Francis' mother asks the player for their name, but after realizing that the baby is indeed Francis, the astounded protagonist tells her that it isn’t important and subsequently takes their leave.

Francis has combed, ginger hair and an orange pencil mustache. He appears to have quite a lean frame and has sharp, defined facial features, while appearing to be in late 20s or early 30s. He is seen wearing a checkered blue knit sweater over a white round collared shirt with a blue necktie, high-waisted and belt-looped khaki green tweed plus fours, argyle socks, and black-and-white spectator shoes. These clothes are atypical for the time and setting in which he lives, adding to speculation that he may be some form of time traveler.

Francis Sinclair is an enigmatic man with ginger hair and a large birthmark over his right eye. He speaks in a strange dialect, using slang that the protagonist does not understand.

Upon completing the Stranger quest "Geology for Beginners" and returning to his cabin, his notes and drawings are revealed to the player, and, based on what the posters depict, they suggest he may be a time traveler. His documents show figures emerging from portals and jumping between the past, present and future. The rock carvings he was interested in depict skyscrapers, metropolises, an atom and a nuclear explosion.

A poster on the wall of Francis' cabin 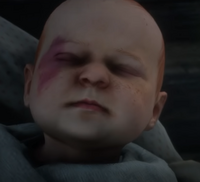 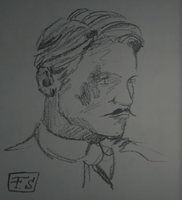 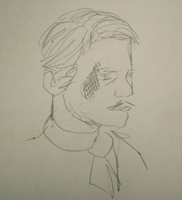