The Fastest Young Man West of the Grizzlies

Frank Heck was a famous gunslinger. It is unknown what happened to him or how famous he was, but since he had a cigarette card and several books made about him, he can be assumed to be quite well known amongst the Old West.

In "True Tales of Frank Heck, No. 102", Frank Heck rides again in Hell, Heck and Thunder on Rawhide Road. According to the book, Frank frequently talked about himself in the third person.

According to the bartender of the Tumbleweed Saloon, Heck was later gunned down inside the saloon, leading to his demise.[1]

Frank Heck is never encountered physically and is only mentioned in books. There is also a Cigarette Card depicting him. 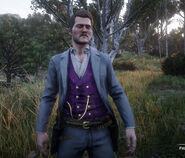