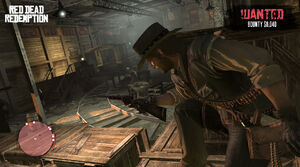 Friends in High Places is a gameplay achievement/trophy featured in Red Dead Redemption.

Use the Pardon Letter with more than $5,000 Bounty in Single Player.

An easy way to achieve this trophy is following these steps (read the notes too before starting):

A quicker (yet more risky) way to achieve this is to go into Blackwater and find a suitable 1-exit room. Shoot several passers-by to gain the attention of the lawmen in the area. Over 50 lawmen will spawn in one shootout, and they have a higher bounty than civilians. Additionally, vandalizing any property in Blackwater will net more bounty.

A potentially fatal and time-consuming way to get the bounty is to travel between Blackwater, Armadillo and Rathskeller Fork, killing citizens and lawmen as you go. It is recommended you find somewhere safe in each town; somewhere that the lawmen can't get to or a room with one way in to create a choke point. Once you have their attention, simply wait for the lawmen to try to enter the room or leave cover, then shoot them. Blackwater will net you the largest bounty each time. Recommended hiding places: your hotel room in Blackwater, the doctor's office, the money room in the bank, or roof of the train station in Armadillo, and on top of the saloon at Rathskeller Fork. It's recommended you save in between clearing towns of lawmen, as you may get caught out, even when you think you're relatively safe.

Retrieved from "https://reddead.fandom.com/wiki/Friends_in_High_Places?oldid=360459"
Community content is available under CC-BY-SA unless otherwise noted.