Frozen Settler is a point of interest in Red Dead Redemption 2.

Although the West is littered with anomalous remains, from whale bones to impossibly large humanoid skeletons, there are few so strange as this simple frozen corpse laying atop a peak in Ambarino. The man's dress is distinctly Spanish in appearance; he is every bit the archetypal conquistador, explorers from centuries past who first plotted these lands for European eyes. How he ended up in the mountains, alone and unburied, far from where the Spanish fastnesses are known to have been, is a mystery.

Arthur's drawing: "Found a fella frozen from a long time ago." 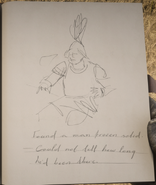 John's drawing: "Found a man, frozen solid. Could not tell how long he'd been there."