"?" blip at Benedict Point
inside the train station

In the Benedict Point train station, Marston meets a writer named Jimmy Saint visiting from Manhattan. The man is enamored with Marston's cold, cowboy appearance and informs him that he is out to document the "Wild West".

This conversation serves as a prelude to a number of instances in which Marston saves the adventurer from bandit camps. This long, drawn out Stranger side-mission serves as an introduction to Gang Hideouts for the player.

Before the first segment becomes available, the player must complete:

To complete the first segment of this mission, the player must:

Jimmy is very easy to locate sitting on a bench inside the Benedict Point train station. Marston will have a conversation with Jimmy about the article his employers have tasked him to write that will "capture the spirit of the West". Marston will caution Jimmy that he may be underestimating the danger he will encounter researching the story. 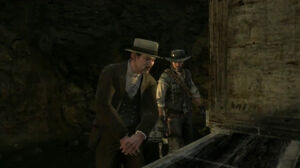 Before the second segment becomes available, the player must complete:

Jimmy will be located in the area inside the mine that has the lift. He will be hogtied and struggling for help. It would be wise to finish the gang hideout here before freeing him. If this proves difficult, simply follow Jimmy as he exits the mine for a quick, trouble-free way out. 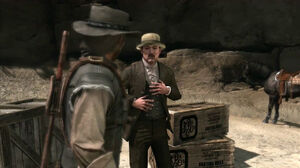 Before the third segment becomes available, the player must complete:

To complete the third segment of this mission, the player must:

Jimmy can be found just south of the words "Pike's Basin" on the world map. He is being held in an area without any gang members, so clearing the hideout isn't completely necessary. 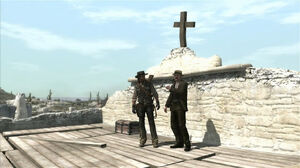 Before the final segment becomes available, the player must complete:

The final encounter is within the Tesoro Azul gang hideout. Jimmy is once again, hogtied on the roof of the main mission building. The ladder to access the roof is inside the building. The player may want to clear out the gang members before freeing him.

During the final encounter, Jimmy says he's going to give up making jokes and maybe become a musician or a war reporter, implying that he hasn't learned anything about being almost killed multiple times.

Note: There is an alternative method of getting to Jimmy without engaging with the gang members. Go to the South wall outside and jump up to the left of the building and go up the ladder, without killing anyone. After freeing him, the player can then just jump off the roof back to outside the walls.

Jimmy Saint riding his steed.
Add a photo to this gallery

Retrieved from "https://reddead.fandom.com/wiki/Funny_Man?oldid=403270"
Community content is available under CC-BY-SA unless otherwise noted.