Arthur: "You wanna head out there? Run with the men? So be it... but we do more than just hunting... we're hunted. And them things hunting us... well, they got guns of their own."
Sadie: "I ain't afraid of dying."
―Arthur Morgan and Sadie Adler

Further Questions of Female Suffrage is a mission in Red Dead Redemption 2.

To get her out of camp for a while, Arthur takes Sadie into Rhodes to collect supplies.

Arthur comes across Pearson and Sadie arguing in camp. Sadie isn't happy with having to stay in camp and cook, stating that when her husband was alive, they shared the chores around their ranch. Arthur agrees to take her into Rhodes. Upon arriving, Sadie wants to rob the store, but Arthur tells her they are only there to get supplies. Sadie enters the store while Arthur goes to the post office to mail Pearson's letter. When approaching the wagon, Sadie is seen with new attire, bickering at the store clerk, who is loading boxes into the back of the wagon. As they are heading back to the camp, a member of the Lemoyne Raiders approaches them, and orders them to stop. Sadie refuses, and shoots at the man, resulting in the other members ambushing them. After Arthur and Sadie fight them off, they drive the wagon back into camp, and Arthur decides to not tell Dutch about their encounter. 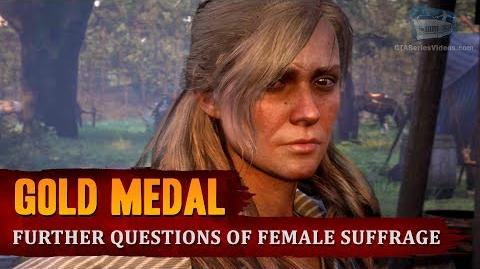