Soldier
Garfield is a deceased character in Red Dead Redemption 2.

Nothing is known about Garfield's life prior to 1864, other than that he was a Confederate soldier. He fell in love with Martha, who was a Northerner.

In his letter to Martha, he discusses thoughts of deserting the army, an upcoming uphill battle against the Yankees and fears of dying. He was killed at the Battle of Scarlett Meadows near Bolger Glade for desertion during the battle. 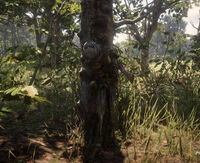 Retrieved from "https://reddead.fandom.com/wiki/Garfield?oldid=411448"
Community content is available under CC-BY-SA unless otherwise noted.