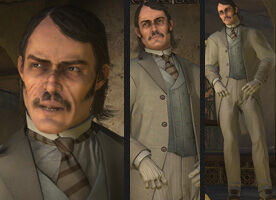 The Gentleman's Attire is an outfit available to be worn by Marston in Red Dead Redemption. It makes the player look like a wealthy high-class aristocrat, and grants access to the High Stakes Poker in Blackwater.

"Wearing this high-class attire allows you into the high stakes Poker games in Blackwater."

To unlock the outfit one must go to the pause menu, scroll down to Social Club. Then click on the "Y" or "Triangle" button to "Sign In". If the player already has a Social Club account, he/she will be asked to sign into it. If not, a prompt to create a new one will appear. After the process is finished, then the Gentlemen's Attire will be in the outfit menu the next time the game is saved.

The outfit will also be automatically unlocked for anyone who had linked their account before Redemption was released.

Gameplay view of the outfit 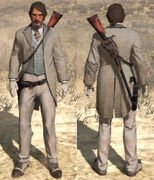 Jack Marston in the Gentleman's Attire.

Close-up of Jack in the Gentleman's Attire
Add a photo to this gallery
Retrieved from "https://reddead.fandom.com/wiki/Gentleman%27s_Attire?oldid=404651"
Community content is available under CC-BY-SA unless otherwise noted.