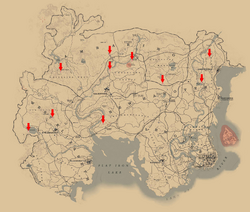 Once all ten Rock Carvings are found, mail the letters at the Post Office and wait two days for a reply. A letter from Francis Sinclair sends an invitation back to the cabin where the quest chain began. When you enter the cabin, you find that Tom Sinclair, Francis' father is dead. Instead, you are greeted by Tom's wife who is holding a baby with the same birthmark Francis had. On the wall is a mural-drawing made from the drawings Arthur mailed in.

On the table is the Old Brass Compass.

Retrieved from "https://reddead.fandom.com/wiki/Geology_for_Beginners?oldid=393790"
Community content is available under CC-BY-SA unless otherwise noted.