Gertrude was born to Catherine Braithwaite and is a member of the Braithwaite family. Disfigured and mentally unwell, her family decided to lock her in an outhouse near Braithwaite Manor instead of sending her to a sanitarium, as they feared that the family name would be tarnished if word of Gertrude’s health got out.

When helping Penelope Braithwaite to escape from her family, Arthur can take her to Gertrude's outhouse. If so, Penelope reveals that Gertrude is her cousin who is mentally ill and that her family decided that keeping her on the property would be better than sending her to a sanitarium. Penelope then states that she'll do what she can from Boston to help Gertrude, to which Arthur is highly doubtful. During this conversation, Gertrude notices Penelope outside and calls her a "bitch".

During the epilogue, Gertrude's outhouse can be visited, revealing that she was never released and apparently starved to death. Her skeletal remains are still contained within the rotting structure.

Gertrude is an unhinged individual prone to random fits of maniacal laughter. She also seems to relish in thoughts that most would find morbid. She does not seem entirely aware.

After being locked in an outhouse for an unknown amount of time and partially exposed to the elements, Gertrude has developed a sickly appearance. Her eyes and cheeks are sunken and her skin is considerably pale. She appears to have a cleft palate lip. She has dirty blonde hair tied in pigtails and a receding hairline. Some of the factors of her appearance may have been caused by her incestuous forebears. 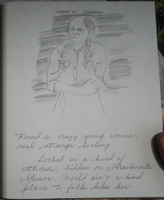 Arthur's drawing: "Found a crazy young woman, real strange looking. Locked in a kind of outhouse, hidden on Braithwaite Manor. World ain't a kind place to folk like her." 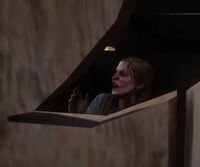