The Gila Monster is an animal species featured in Red Dead Redemption 2.

The gila monster is a venomous lizard living in New Austin, on the banks and generally north of the San Luis River. Their heads and necks are broad and their eyes are black with round pupils. Their bodies are covered with beaded scales and bright black, pink, yellow and orange patterns. Their wide feet end with long, sharp claws.

As carnivores, they prey on small mammals, lizards, frogs, birds (and their eggs), and carrion.

The Gila Monster is found in New Austin, primarily in Cholla Springs, Rio Bravo, and Gaptooth Ridge. They are most active at night.

The Gila Monster stowed on the horse 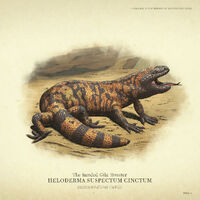 Gila Monster in orange and black

Gila Monster in white and black