As the name implies, these weapons are golden in appearance. Two categories of Golden Guns exist - one type is available via a DLC purchase for the single player campaign and the other type is unlocked in Multiplayer by completing Weapon Challenges. Although referred to as Golden Guns, non-firearms such as the Tomahawk, Dynamite, and Fire Bottle can also be made golden.

Two Golden Guns were initially available as a bonus for ordering Red Dead Redemption prior to its release in May 2010: the Repeater Carbine and the Cattleman Revolver. In addition to the golden appearance, these guns also earned the player extra fame with each kill, unless the player is wearing the bandana, which negates honor and fame.

The pre-order code makes the same two Golden Guns available during the Undead Nightmare Single Player campaign. Since fame is not a factor in Undead Nightmare, its bonus does not apply.

On April 13, 2011, Rockstar Games released the Golden Guns Weapon Pack as a DLC via PlayStation Network and Xbox LIVE. At time of release, the DLC cost $0.99/£0.79 (or 80 Microsoft Points). This pack makes most weapons that the player owns in single player golden, with the exceptions of thrown weapons, weapons added by other DLC, and the Hunting Knife. The fame bonus noted for the pre-order weapons also applies to this pack. With the addition of the Myths and Mavericks Pack there is now a toggle to turn the Golden Guns on and off in single player. In 2014 an update was made where you can enable the golden guns in the options list.

For certain members of the media (confirmed by Rockstar Games on a Developer Q&A Thread September 5, 2010), there were press discs with golden weapons fully unlocked on the multiplayer, including hidden golden weapons such as the Hunting Knife.

For players who wish to undo the effect of the pre-order code or DLC after installation, Rockstar created a support article detailing how this can be done: How to turn off Golden Guns in Red Dead Redemption. Alternatively, you can just go into options in the pause menu and just turn them on/off from there.

See also the note in the Bugs section, below, regarding Title Update 1.07.

In Multiplayer, Golden Guns are earned one at a time by completing all of the Weapon Challenges for a given weapon, alternatively, snag one hundred headshots in a ranked multiplayer match. Most, but not all, weapons can be made golden in multiplayer. Refer to the Weapon Challenges page for complete details on the challenges and a list of eligible weapons. Unlike their single player counterparts, there is no benefit to the multiplayer Golden Guns beyond appearance - they are simply intended as a sign of prestige.

The guns in a player's inventory are not designated as "Golden" or otherwise noted, instead the golden appearance is just automatic whenever the gun is drawn. This works for guns picked up off of a dead enemy or picked up from a weapon chest as well as those unlocked in the player's inventory. Note that only the metal parts of a weapon are golden. Other parts (wood, ivory, etc.) retain their normal appearance. When the golden weapon leaves the player, it returns to normal appearance, such as when the tomahawk is thrown. Weapons such as the Fire Bottle and Dynamite have gold plating, but are reverted to original form when they are dropped.

After advancing into Legend (restarting back at level 1) any earned golden guns will remain golden, even though the associated weapon challenges are reset to zero. It is best to check the challenge stats for each non-golden gun prior to accepting Legend so that any that are close to earning golden status can be completed first.

The challenges that unlock golden weapons can only be completed within competitive matches and cannot be unlocked within Free Roam. The golden weapon will transfer over into Free Roam once unlocked, however.

Guns made golden in multiplayer do not transfer over into single player (or vice versa).

The player can easily snag headshots in casual games. Since it is set to casual aim.

While golden guns as they functioned in Redemption don't make a return, with the new weapon customization system in Redemption 2 any gun in the players possession can be equipped with a Gold metal finish at a Gunsmith, with the exception of the Double-action Revolver which requires challenges to be completed in Grand Theft Auto Online to unlock the gold customization.

The Golden Cattleman Revolver, part of the pre-order DLCs

Marston aiming the golden cattleman revolver from a coach. 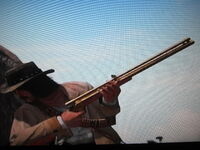 A golden Rolling Block Rifle
Add a photo to this gallery

Retrieved from "https://reddead.fandom.com/wiki/Golden_Guns?oldid=399905"
Community content is available under CC-BY-SA unless otherwise noted.