Arthur: "They expressly told me not to kill you."
Allbright: "Well, this is about you!"
―Arthur Morgan and Benedict Allbright during their standoff.

Following a tip from the Valentine Sheriff, Arthur attempts to capture and turn in Benedict Allbright, a wanted criminal, out near the Dakota River.

Following Uncle's advice, Arthur enters the sheriff's office in Valentine. He speaks with Sheriff Malloy, who points out a wanted poster on the wall for Benedict Allbright, a snake oil salesman who is engaged in quackery. His medicine is killing people, and Arthur is asked to bring him in alive. After finding Allbright, Allbright is initially suspicious that Arthur is a bounty hunter. Arthur pretends he is looking for medicine for his sick mother, and after being handed the medicine, he throws it in the water and aims his revolver at Allbright. Allbright claims he is a healer and can speak to spirits, and refuses to come in.

Arthur is forced to save his life after he nearly falls off the cliff, but Allbright is dismayed that Arthur still intends to bring him in. Allbright jumps into the water below, but gets caught in the current (if Arthur fails to pull him back up onto the cliff, he will fall into the river without the intervening cutscene). Arthur chases after him, and eventually catches him with his lasso, hogtying him. He transports Allbright to the sheriff's office, and collects the bounty. 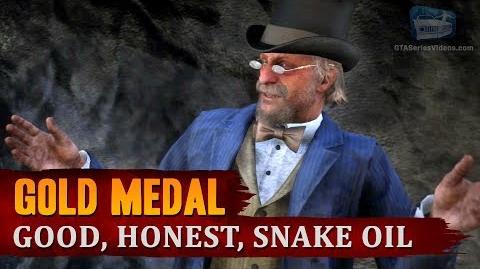 Completing this Honor story mission is associated with these trophies/achievements:

Retrieved from "https://reddead.fandom.com/wiki/Good,_Honest,_Snake_Oil?oldid=415863"
Community content is available under CC-BY-SA unless otherwise noted.