Goodbye, Dear Friend is a mission in Red Dead Redemption 2.

With Colm O'Driscoll under arrest, Sadie, Arthur and Dutch head to Saint Denis to watch him hang.

News reaches the gang that Colm is to be hanged. However, knowing that Colm had escaped the noose twice before, Dutch and Sadie are prompted to attend his execution in person to ensure that Colm doesn’t escape this time, and they bring Arthur along with them to help. Realising that they are wanted outlaws themselves, they attend the hanging in disguise, with Dutch and Arthur dressed in police uniforms and Sadie as a lady of high society.

Upon reaching Colm, they notice two shifty-looking men and realise that they are O’Driscolls. Dutch and Arthur follow them and, when realising their plan, Dutch sends Arthur to deal with Colm’s men while he returns to Sadie. After the saboteurs are removed, Arthur takes up a position on the roof with a sniper rifle, while Dutch and Sadie each hold an O’Driscoll hostage at gunpoint. With the rescue attempt thwarted, Colm is hanged as planned.

Sadie, however, is unable to contain her rage and kills both her hostage and Dutch’s. This causes a shootout with some remaining O’Driscolls against Arthur, Dutch and Sadie. With the latter two fighting on the ground, Arthur snipes some from the rooftop. With the O’Driscolls defeated, Dutch and Sadie return to camp, shortly followed by Arthur. 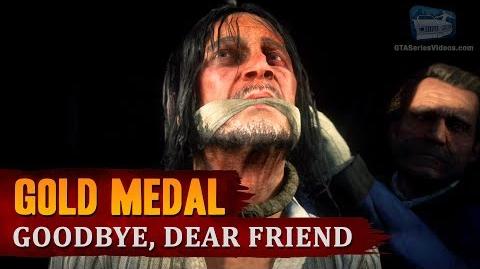