Grace Lancing (née Brown) is a minor, but key character and one of the main antagonists featured in Red Dead Online.

Grace is a society patroness, art enthusiast, and the sister of notorious outlaw Teddy Brown. At some point before 1898, she married wealthy and well-respected landowner Amos Lancing and became close friends with Jessica LeClerk, the wife of Amos' business partner Philip.

In 1898, the Lancings and Jeremiah Shaw conspired to take over Philip's business and had Teddy murder him in Blackwater. Not long after, Jessica came to suspect that they were behind the murder and had her assistant Horley release the protagonist, who was wrongfully accused of killing Philip, from prison so that they could help exact revenge.

After killing Teddy and Amos and dealing with Shaw, Jessica and Horley are forced to go into hiding because of their involvement in criminal activities, but the former vows to find and kill Grace some day, so that Philip's death can be completely avenged. Until then, Jessica takes comfort in the fact that Grace is now a widow, just like her.

Not much is known about Grace's personality, since she is never seen in person. However, from her actions it can be deduced that she is very greedy, because she and her husband arranged the murder of Philip LeClerk to take over his business. This act is made more heinous and selfish by the fact that Grace was good friends with Jessica; by being involved in her husband's murder, Grace proved that she cared very little or not at all about their friendship. 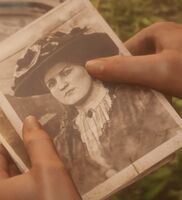