Gray’s Secret is a points of interest in Red Dead Redemption 2.

Found on the porch at Caliga Hall, Gray’s Secret is the corpse of Tavish Gray. He committed suicide after a letter (which can be found next to him) from an Edinburgh University historian, Malcolm Moffat, revealed that his ancestor, Ross Gray, was not an exiled Jacobite as previously believed, but a spy for the Duke of Cumberland. 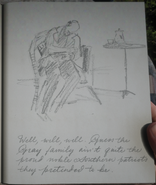 Arthur's drawing: "Well, well. Guess the Gray family ain't quite the proud noble southern patriots they pretended to be." 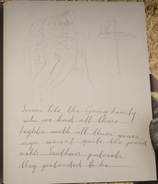 John's drawing: "Seems that the Gray family, who we had all those fights with all them years ago, weren't quite the proud noble Southern patriots they pretended to be."

Retrieved from "https://reddead.fandom.com/wiki/Gray%E2%80%99s_Secret?oldid=382657"
Community content is available under CC-BY-SA unless otherwise noted.