The Grays immigrated to North America in 1755, when Jacobite supporters in Scotland began hunting down and killing Scottish loyalists who had informed against them during their 1745 uprising. The founder of the family, Ross Gray, was one such informer and had been paid for his services in cash, cattle, and land confiscated from his neighbor by the Duke of Cumberland.

The Grays arrived in Scarlett Meadows, then still part of the French possessions in the Americas, and quickly established themselves in the area. Taking advantage of slavery, they brought in high production of tobacco and cotton. They also used their fresh start to cover up the true reasons for their flight from Scotland and portray themselves as exiled Jacobites.

In 1806, Lucile Braithwaite gave the location of a significant sum of gold to Douglas Gray. With Lucile's permission, he stole this gold from the Braithwaites, and stole some more gold from his family, in order to finance local abolitionist groups. The two sides, believing that the other stole their treasure, started feuding.

The abolition of slavery badly damaged the Grays, along with the Braithwaites, and they lost a large amount of wealth as a result. By 1899, the Gray family still had a significant presence in western Lemoyne, rivaled only by the Braithwaite family. The Grays were especially prevalent in the town of Rhodes, where they owned the Rhodes Parlour House and controlled the local Sheriff's Office.

Immediately following their relocation to Clemens Point near Rhodes, the Van der Linde gang befriends the Grays after Dutch van der Linde and Arthur Morgan help Sheriff Leigh Gray capture a few criminals who escaped from his custody. In return, Leigh names the two and Bill Williamson his deputies. He later sends them to take down a Braithwaite-affiliated moonshine operation.

While at Caliga Hall, Arthur comes across Beau Gray, who asks him to deliver a love letter and a gift to Penelope Braithwaite, as the two of them can't be seen together due to their families' rivalry. Arthur then delivers a letter from Penelope to Beau, which states that she is planning to do a rally for the women's suffrage movement. Fearing for Penelope's safety, Beau asks Arthur to try to stop her from going, which he agrees to do.

Arthur, John Marston, and Javier Escuella are later hired by Tavish Gray, the family's patriarch, to steal several prized horses from the Braithwaites. However, after Arthur and Sean MacGuire burn down the Grays' tobacco fields on the Braithwaites' behalf, the family learns that they have been played by the gang, and Leigh Gray sets up a trap for them in Rhodes.

When Arthur, Bill, Sean and Micah Bell arrive in Rhodes looking for more work from Leigh Gray, they are ambushed by the Grays' gunmen, who immediately kill Sean. After a lengthy shootout with the gunmen, Arthur and Micah manage to kill them, but Bill is captured by Leigh, his deputies, and Jock Gray. Arthur and Micah confront and kill them in front of the Sheriff's Office, saving Bill. Tavish Gray commits suicide not long after.

Arthur later helps Beau Gray and Penelope Braithwaite run away from their families to start a new life together. He takes Penelope to the Rhodes train station, where Gray is waiting. While buying tickets, Beau's cousins Iain and Scott Gray see them and attempt to drag him away, but Arthur steps in and knocks them out. The three then get on the train, and although the Braithwaites attempt to stop them, the pair reaches Riggs Station. They then disembark, and the two lovers get on a stagecoach bound for Boston.

By 1907, what was still left of the Gray's lived in Caliga Hall, but their influence in town had been diminished by the new Sheriff, Harmon Thomas, who pledged to clean the town up of Gray and Braithwaite influence, shortly after being elected the new sheriff after the death of Leigh Gray. 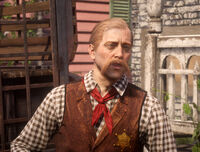 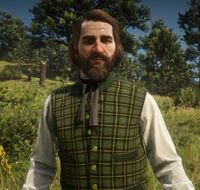 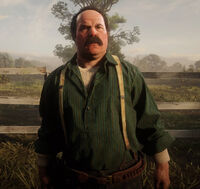 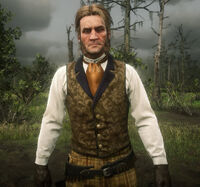