Great Men are Not Always Wise/dialogues
“You know, gentlemen, this man here, he married a whore. Used to ride with us. We all had her, but he married her! And you know, that makes him a better man than us. He's a better man...”

Great Men are Not Always Wise is the forty-third mission in Red Dead Redemption.

Word has it that Dutch van der Linde is coming into Blackwater to meet with the Banker. John heads to the bank joining Edgar Ross and his posse. The posse ends up on a roof across the courtyard from the bank and must snipe Dutch's gang before they get away.

Once inside the bank, a small stand-off between Marston and Dutch ends with the death of a female bank worker named Muriel Scranton and Dutch's escape. The posse rides a short distance tailing Dutch, killing more of his gang along the way. Despite finding Dutch's automobile burning on the side of the road, he still manages to escape. Ross, of course, blames Marston.

After a small cutscene, run across the yard into the bank and kill the enemies inside. There will be one gang member holding a hostage — use Dead Eye targeting to take him out and then head upstairs after the civilians run out. Don't take too long, or the hostage will be executed, which fails the mission. Take out the few enemies upstairs, then head into the back room to get a dramatic cutscene of Dutch killing a hostage and leaving with the banker.

Mount your horse and ride with the lawman after Dutch to Bearclaw Camp. You'll find his automobile burning and the banker's corpse, and then a large gang of enemies. Take them out and meet up with the other government agents for a cutscene to end the mission.

John Marston and Guy Crossfield after the shootout at Bearclaw Camp 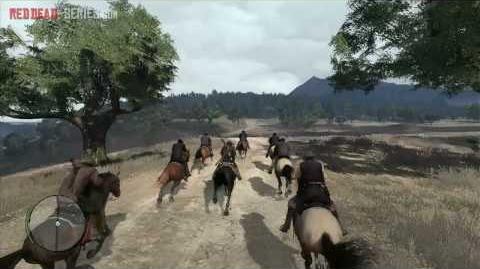 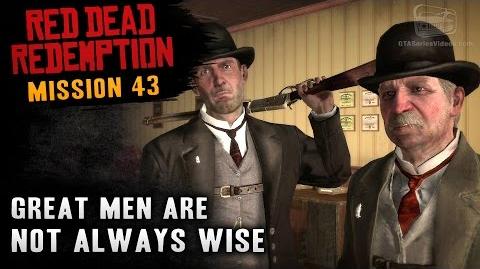 Retrieved from "https://reddead.fandom.com/wiki/Great_Men_are_Not_Always_Wise?oldid=405691"
Community content is available under CC-BY-SA unless otherwise noted.