After completing the level "Bounty Hunter" with an Excellent rating, "Big Oaf" Whitney becomes available as a playable character in Showdown Mode. He will also become playable after the player buys the Stethoscope. His special ability grands him throwing knives. He can also pick an opponent up and throw them.

Big Oaf and his son, Loaf, are outlaws in the Bloody Tom Gang who came from Scotland. Big Oaf's father was allegedly a medical doctor. Greg has the second highest bounty in the game, showing he takes part in many criminal activities.

During the mission "Bounty Hunter", Red Harlow unknowingly walks into the Bloody Tom Gang's base of operations, Twin Rocks. After most of the gang is dispatched, "Bloody" Tom himself, along with Big Oaf and Little Loaf, come out and attempt to kill Red. Tom and Big Oaf charge at Red immediately, and both are killed.

His character model is later used again as a part of waves of attackers in the mission "Range War". However, due to his role in the game it is unlikely that that character is suppose to represent Greg.

Greg Whitney's page is unlocked the same way his character model is, as listed above. He is listed in Sheriff Bartlett's Journal under the Wanted - Dead or Alive section. 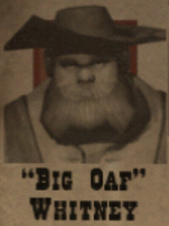 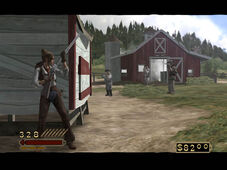 Greg can be seen as one of the attackers, along with Udo Kang.

Retrieved from "https://reddead.fandom.com/wiki/Greg_Whitney?oldid=406840"
Community content is available under CC-BY-SA unless otherwise noted.