Grizzlies West is a constituent region of the Ambarino territory in Red Dead Redemption 2 and Red Dead Online.

Grizzlies West features steep cliffs and difficult mountain passes. The area is bordered by Big Valley further to the west and the neighbor Grizzlies East to the east. The southern border is defined by Dakota River passing through the region. The Redemption Mountains make up the rest of the border to the north.

The area is largely covered by snow to the north and abundant woodland near the riverside. As such, the area is severely isolated and dangerous evident to the lack of settlements and towns in the area. The region consists of mountain ridges, snow-capped valleys, and treacherous cliffs. Its climate is colder than any other region in the game, with mostly sub-zero temperatures, and so it is advisable to wear extremely warm clothing when entering the region. Very little wildlife inhabits the land, as not many species can survive the harsh temperatures and weather conditions.

Notable landmarks and places within the area are Mount Hagen, one of the highest accessible mountains, Lake Isabella a large lake in the west of the region, and Colter, an old abandoned mining town near Spider Gorge. Aside from the lake, there are patches of frozen ponds and small lakes hidden within the region. An active creek is present despite the cold temperature far north; its main sources are the mountain glaciers of the Grizzlies. 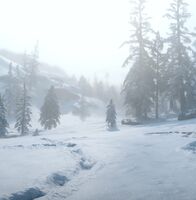