West Elizabeth
“You know, one time I hunted a bear up in Tall Trees. You never seen a bigger animal in all your life...”

Bear is an animal species found in Red Dead Redemption.

A bear can be identified in-game by its loud growl, and by its panting, thumping sound when running. In single-player, two strikes from a bear can kill Marston, while in multiplayer one strike is fatal enough.

They can be hunted, skinned, and sold for large amounts of money at General Stores throughout the game. Like many predatory animals, they will often respawn very rapidly, so it is not uncommon to encounter another bear immediately after skinning one. After killing a bear, it is recommended to wait for two or three more to come so that you can kill them all off before skinning them. Although the player is impervious to attack while skinning, the bears may sometimes wait until the player is finished skinning and immediately strike Marston afterwards.

There are two types of bears in the game: the brown bear, which is a light-colored kind, and the grizzly bear, a darker gray kind. The darker bears can withstand more shots than the lighter bears, sometimes taking up to three buffalo rifle shots in the body before dying.

Bears are some of the several animals infected with the undead plague of Undead Nightmare, appearing as undead bears with the same strengths of their living counterparts, but also weaknesses of their fellow undead beings.

The player can kill a bear in one shot, right between its eyes, using these weapons:

There are a few ways to kill a bear with a knife: A description of a grizzly bear.

John Marston fighting Brumas the Bear with the Hunting Knife and wearing the Expert Hunter Outfit.

The Grizzlies of Tall Trees will frighten more than the horses.

About to pass the Master Hunter Challenge level 8, or die miserably... 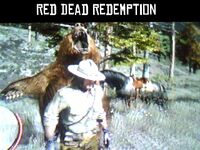 Wolves are fearless in packs. 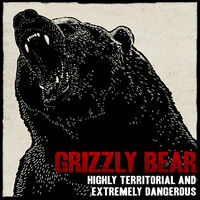 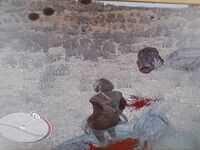 A bear south of Blackwater. 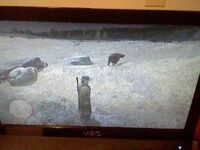 A bear in Great Plains. 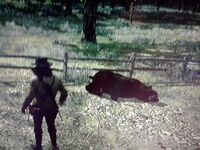 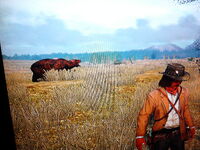 There are two available rewards involving the hunting of Bears.

Retrieved from "https://reddead.fandom.com/wiki/Grizzly_bear?oldid=377402"
Community content is available under CC-BY-SA unless otherwise noted.