West of the North Atlantic Ocean

Guarma is a tropical island located in the Caribbean in Red Dead Redemption 2.

It is the primary location in which most of the missions in the fifth chapter takes place. The player is trapped on the island after the events of "Banking, The Old American Art", and returns to America following "Paradise Mercifully Departed" after which it can't be revisited.

Guarma is an island east of Cuba. The explorable regions of the territory are situated within a bay called Bahía de la Paz. Most of the area are beaches and shorelines where it slowly elevates up to the cliffs of Cinco Torres and Aguasdulces itself. A single river, Arroyo de la Vibora, flows into the bay where it is home to exotic bird species and other wild animals exclusive to the island.

Around Aguasdulces, sugar fields primarily encompass the landscape. Within its vicinity is La Capilla, an abandoned church. Opposite from the plantation is Cinco Torres, an old Spanish fort.

Guarma is primarily a sugar plantation run by Colonel Fussar.[1] It is a jungle island, as such, this is the only place where booby, parrot and certain crab species exist and live. It is administered by Cuba and uses mostly indentured servants and political prisoners to work on the plantations, both of which are slaves in all but name.

Sometime before the year 1899, Fussar became the dictator of the island, and a revolution against him was started, receiving support from a Haitian smuggler named Hercule Fontaine.

After the failed bank heist in Saint Denis, Dutch, Arthur, Javier, Bill, and Micah sneak on-board a ship on the docks of Saint Denis in an attempt to escape the law. During their journey, a large storm hits and sinks their ship. Arthur goes overboard and is separated from the gang, while the money from the bank heist is lost.

Arthur washes up on the shore of Guarma and searches for civilization. He soon finds the other four at a campfire but, immediately after, the local military led by Levi Simon arrest them and transport them in shackles to jail. Along the way, the rebel militia bombard the soldiers with bullets and, in the confusion, Arthur collects keys from a dead soldier's corpse and uses it to unlock the shackles. After killing off the guards leading them, Hercule Fontaine, the revolutionary leader, tells the gang to follow him. As they escape, Javier is shot in the leg and wounded by reinforcements, so they are forced to leave without him. Fontaine leads the remaining gang to La Capilla, which is stocked with rifles. Reinforcements soon arrive, but the gang and Hercule ultimately manage to repel them. Afterward, the group proceeds to a small rebel outpost in the jungle.

After arriving at the outpost, the gang rests for a short time, before setting out to find a way off the island. Per Hercule Fontaine's request, Arthur is sent to investigate the workers' situation. While Arthur makes his way to them, he is knocked out by a tranquilizer dart in the jungle and held captive by the military. Upon waking, Arthur is met with several punches from Angel, who demands to know who Arthur is and what he is doing. After Arthur gives the alias of Leviticus Cornwall, Angel begins beating two other men for any information. As he does, Arthur rocks on his chair until he falls over, causing his restraints to be undone. Angel realizes at the last second and lunges at Arthur with a knife, but Arthur disarms him and savagely beats him into unconsciousness. Arthur then unties the other two men. One is Leon Fuentes, who asks Arthur to help him, while telling the other, Baptiste, to stay behind and rest due to his injuries. Arthur and Leon sneak past several guards until they reach a site where a number of workers had been hanged for rebellion, and one guard prepares to hang the remaining three, but Arthur saves them in time. Several guards then set an ambush, which Arthur manages to fight off. Afterward, Leon helps a few of the remaining workers to escape with him and pays Arthur for his troubles.

Arthur and Dutch then divert their attention to rescuing Javier. To do this, they go to a cave where an old lady named Gloria is. Dutch pays her a gold bar to lead them through the cave, up to a ladder that would bring them up to Aguasdulces. She then demands more money, but Dutch refuses. In response, Gloria pulls a knife on him, only for Dutch to grab her by the throat and strangle her to death, prompting dismay from Arthur. The two of them then enter Aguasdulces, where they see Colonel Fussar, Levi Simon and a group of soldiers, who are seen taunting and beating Javier for information about the gang, while he is pulled along by a donkey. Arthur and Dutch quickly begin looking for ways to find a distraction, which they find in the sugar refinery. After silently killing a few guards, Dutch slashes the bags of sugar, spilling it all over the floor, while Arthur closes the shutters. The distraction works and, shortly afterward, the warehouse blows up and the guards go to investigate, allowing Arthur and Dutch to get to Javier. After Dutch picks him up, they flee the settlement, until they reach the river of Arroyo de la Vibora. At the river, Arthur tells Dutch to take Javier away while he fights off the waves of soldiers who are in pursuit. After doing so, Arthur returns to the rest of the gang.

After rescuing Javier and helping the workers, the gang goes to Cinco Torres. Here, they see a Cuban warship approaching, and swarms of enemies attacking. The gang and Hercule shoot at the soldiers from above, before going down to the beach and finishing them off. They then rush back to the top and man the cannon as the warship approaches. After a meticulous bombardment, the warship is sunk, and they begin planning on making an escape off the island.

As the five prepare to leave, Micah reports that Colonel Fussar has set up gun batteries that will prevent them from leaving the island. Realizing that they must be silenced, Arthur, Dutch, and Micah assault the batteries and blow up the cannons with dynamite. They then set out to find the ship captain, who is reportedly in the workers' cabin. Arthur breaks in to find the captain, but gets tackled by Levi Simon and held at gunpoint. Dutch then comes in and puts Simon at gunpoint before Fussar aims his own gun at Dutch, who, in turn, points another gun at Fussar. The standoff ends when Arthur kicks the ship captain his rifle, who kills Simon by shooting him in the chest. Fussar flees the cabin during the chaos, resulting in Arthur, Dutch and Hercule pursuing him. They eventually find Fussar in a tower manning a machine gun; to bring him down, Hercule and Dutch draw Fussar's fire while Arthur sneaks towards a nearby cannon. Arthur shoots the tower, destroying it and killing Fussar in the process. With all attempts to stop them from leaving having been thwarted, the five gang members finally depart from Guarma.

Despite the death of Fussar, the residents of Guarma continued to suffer hardships. By 1907, control of the sugar industry on the island was taken over by American banking institutions, which converted what land had been set aside for growing produce for local consumption into more sugar cane fields for plantations. Due to the crop production on the island solely being sugar cane, all foodstuffs have to be imported. As a result, the locals on Guarma constantly experience inflated prices and short supply of essential resources such as fuel. Foreign investors also hired locals to guard and police their plantations, subjecting workers to further oppressive conditions.[2] 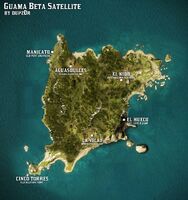 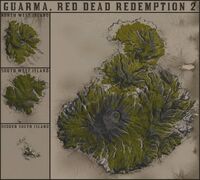 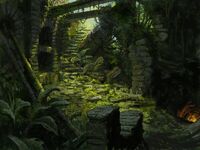 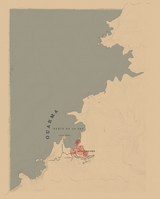 A panoramic view of Guarma

The eastern coast of Guarma 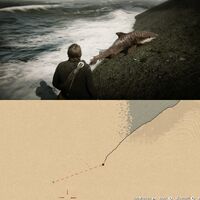 Transition of the jungles in Guarma

A typical landscape in Guarma

Deep inside the jungles of Guarma

In the jungles of Guarma

A possible path in the jungles

An uneven terrain in Guarma