“If you think I'm going to lower myself by making a joke about being 'all tied up', you've got another thing coming.”

–Bonnie MacFarlane after nearly being hanged

John Marston walks into the Armadillo Sheriff's Office to find Marshal Leigh Johnson and Bonnie's father, Drew MacFarlane. Bonnie has gone missing and her father partly blames Marston. Just then, a member of Bill Williamson's gang rides up, claiming to have Bonnie under the danger of being raped and murdered and demanding her exchange for Norman Deek, who was captured earlier. Bonnie's father pleads with Marston to get his daughter back. Leigh and Jonah grabs Deek from jail and the group take him to Tumbleweed, only to be ambushed by the gang, who kill Deek in the crossfire (or players can kill him themselves). John must fight his way through the gang to rescue Bonnie.

Walk up with Deek out in front. Push him a little if you want to get mean. Three outlaws will walk to meet you. They laugh at you and begin drawing their weapons. Use Dead-Eye and kill the three men, making sure Norman gets caught in the crossfire. It's time for your Winchester Repeater, or any other rifle you have. Start taking out kidnappers as you move to your right watching for the spot that Bonnie is located. As you take out the bad guys, a cutscene will play as the stool is kicked out from under Bonnie, and she will die if the player doesn't hurry. Take care of the remaining enemies, including the one next to Bonnie. Go over and cut Bonnie free and wait on the ending cutscene. Alternatively, you can use Dead Eye to shoot the rope. Having the second level of Dead-Eye will make this much easier. Another way to do it, is cutting Bonnie loose first, and than taking out the rest of the gang, with less stress. After they're all dead, return to Bonnie, and trigger the cutscene. 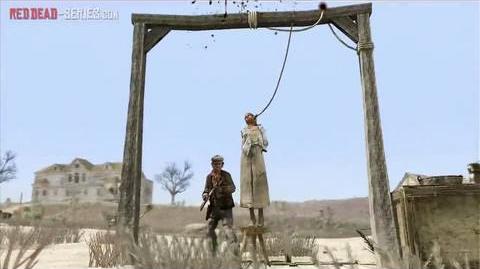 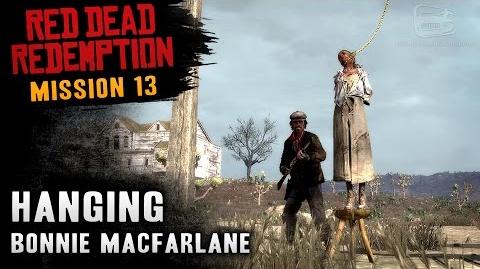 Retrieved from "https://reddead.fandom.com/wiki/Hanging_Bonnie_MacFarlane?oldid=406077"
Community content is available under CC-BY-SA unless otherwise noted.