Town of Rhodes in Scarlett Meadows, State of Lemoyne

After the death of Sheriff Leigh Gray in 1899, Harmon Thomas is elected as the next Sheriff of Scarlett Meadows. He remains sheriff of the county as of 1907, at which point he has earned himself a reputation for cleaning up the town of Rhodes, and ridding it of Gray and Braithwaite influence.

The player can deliver the bounty targets Mark Johnson, Robbie Laidlaw, and Camille de Millemont to him.

In 1907, Sadie Adler and John Marston bring in a criminal named Ramón Cortez, a member of the Del Lobo Gang. He asks for the two of them to help guard Cortez while he waits for his deputies to arrive, which they agree to do. Unfortunately, during the wait, the Del Lobos attack, and the three are forced to engage them. Although they kill most of the gang members, some manage to blow a hole in Cortez's cell that allows him to escape. Sheriff Thomas tells John and Sadie that if they bring back Cortez, he will pay them an additional $75. They do this, and Thomas loads Cortez into the back of a jail wagon to take him to Saint Denis, where he will be hanged.

Harmon Thomas has a strict personality, a no-nonsense man with a clear view of justice, as unlike Leigh Gray, he takes his job seriously and efficiently clears the town of Rhodes from Braithwaite and Gray influence. He is generally compassionless and unforgiving towards criminals, publicly executing Mark Johnson despite his attempt at redemption, seeing it as nothing more than his duty. Thomas can also be grateful at times, thanking John Marston and Sadie Adler for turning in Ramón Cortez after his escape.

Thomas has a white variant of the Military Cavalry Hat, with an average complexion, he sports a long, bushy moustache. He wears a white everyday shirt with an opened yellow vest, a typical leather belt and holster and some dark brown coat, pants and boots. He's often seen covered in the red, dusty soil that Scarlett Meadows is made of. By 1907 his appearance hasn't changed noticeably. 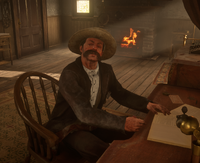 Sheriff Harmon Thomas at his desk 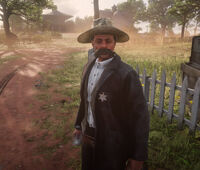 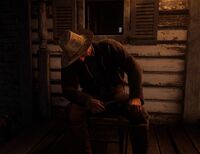 Thomas with his knife.

Thomas relaxing on the porch of the Rhodes Parlour House, 1907