After the death of Sheriff Leigh Gray in 1899, Harmon Thomas is elected as the next Sheriff of Scarlett Meadows. He remains sheriff of the county until at least 1907. The player can deliver the bounty targets Mark Johnson and Robbie LaidLaw to him.

By 1907, Sheriff Thomas has earned himself a reputation for cleaning up the town of Rhodes, and ridding it of Gray and Braithwaite influence.

In 1907, Sadie Adler and John Marston bring in a criminal named Ramón Cortez, a member of the Del Lobo Gang. He asks for the two of them to help guard Cortez while he waits for his men to arrive, which they agree to. Unfortunately, during the wait, the Del Lobos attack, and the three are forced to engage them. Although they defeat the gang members, Cortez blows a hole in his cell to escape. Sheriff Thomas tells them that if they bring back Cortez, then he will pay them an additional $75. They do this, and Thomas loads Cortez into the back of his wagon and brings him to Saint Denis to hang. 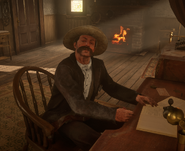 Sheriff Harmon Thomas at his desk
Add a photo to this gallery
Retrieved from "https://reddead.fandom.com/wiki/Harmon_Thomas?oldid=365149"
Community content is available under CC-BY-SA unless otherwise noted.