With the addition of the Liars and Cheats DLC pack, Professor MacDougal is also a multiplayer character model that may be selected in the 'Damnation' section of the Outfitter.

MacDougal was born circa 1869.[1] He claims he is on a sabbatical from Yale, although Edgar Ross claims he was forced to do so due to "degeneracy," and was currently residing in Blackwater.

While in Yale, MacDougal was introduced to cocaine, a drug that he abuses throughout the story, which exacerbates his nervous personality and causes him to have insomnia and bouts of extreme panic. He is an academic whose 'book' intelligence is rendered useless in the violent and pragmatic environment of the Old West.

When John Marston and Archer Fordham retrieve Nastas from Dutch's trap at the Wreck of the Serendipity, they drop him off at Professor MacDougal's hotel room to recover. Edgar Ross then instructs Marston to pay him a visit later.

When John Marston visits MacDougal again, he finds him comparing blood samples of, in his opinion, the 'savage' Native Americans and the 'civilized' white man. After observing them, he is absolutely shocked to see that they are exactly the same. Nastas then enters, and MacDougal tries to communicate with sign language and metaphors, but Nastas responds to him by speaking in a perfectly normal manner. Nastas claims to know the location of Dutch Van Der Linde, and both Marston and MacDougal follow Nastas into Tall Trees, where MacDougal rides back to Blackwater, obviously frightened. After Marston gets knocked out, Nastas runs up the mountain and carries him back to MacDougal, where he revives him with smelling salts. MacDougal claims that he and Nastas carried Marston back, but after an angry glare from Nastas, he reveals Nastas carried Marston down, and he planned the escape.

When John Marston encounters MacDougal again, Nastas arranges a meeting with Dutch's men at Bearclaw Camp. On the way, they encounter a bear, and MacDougal, horrified, shoots the bear, which, in turn, makes the bear angry. When it attacks, Marston kills the bear before it could do any damage. Nastas then says that the bear meant no harm and would not have attacked if MacDougal had not shot first. The meeting with Dutch does not go very well as Nastas is shot in the head after being called a traitor. The professor cowers in fear as Marston fights Dutch's men, and the two of them escape back to Blackwater. During the escape trip, MacDougal is saddened that Nastas was killed, thinking he was "a brilliant savage companion."

Marston next finds him packing in a hurried state, repeatedly calling either the natives or Dutch's gang (or both) "fucking savages," and aiming to take the next train back to Yale. Dutch van der Linde and several men approach his house from the street, firing a gun at the building, telling John to send MacDougal outside so that they may show him their own method of 'Anthropology.' Marston and MacDougal escape via the rooftops, but Dutch has snipers all over the town. After a battle, Marston and MacDougal get on their horses and run full speed to the train station at Manzanita Post. Marston, along the way, kills any of Dutch's men trying to pursue them.

When they reach the station, MacDougal thanks Marston for his help. He shakes his hand but gives up and gives him a hug before boarding the train. He is not seen again for the rest of the game.

MacDougal succeeded in returning to Yale University, for a time. In 1914, MacDougal was caught beating Professor Lionel Fortisque, a fellow scholar, on the head with a croquet mallet after an argument before he climbed a building completely naked and demanded he be brought fine food and drink. After this drunken episode he was then kicked out of the university. The newspaper article detailing this event emphasizes the "savagery" of the attack; an ironic choice of words as MacDougal accused Native Americans of being savages. In the newspaper article, it is also rumored that Harold requested to have the university grounds keeper have the top of his head opened so he could photograph a living brain.

MacDougal appears in the mission "Curious Tales from Blackwater". John Marston happens to encounter the professor while looking for survivors in the overrun town of Blackwater, to which MacDougal claims to have returned for "more research". Marston attempts to ascertain the nature of the plague through the professor, to which he replies he doesn't have "a fucking clue." Seeing as MacDougal is unarmed, John implores the frightened professor to stay with him, to which he agrees on the condition that Marston allows him to wander down a lonely, deserted road to get his bags, which he left with Nastas. MacDougal is able to manage a few paces before being assaulted and devoured by the undead Nastas. Marston has the choice to kill both of them afterward.

Although learned academically, MacDougal is demonstrably naïve and small-minded, and his behavior towards the local Natives demonstrates his ignorance of their culture that allows for multiple displays of prejudice and bigotry; he is unwilling to accept the "savages" as human beings despite taking blood samples that showed that the Natives had the same blood as Caucasian humans. He is also largely incompetent in practical matters, a trait which draws disdain among his acquaintances, including John Marston and Nastas. 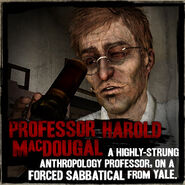 MacDougal as a Redemption Multiplayer skin

Artwork of an undead MacDougal for Undead Nightmare

Harold looking at a slide on his microscope