Harry Dobbing is a minor character and a bounty target featured in Red Dead Redemption.

Dobbing is a member of the Bollard Twins gang. He is wanted for assault and can be captured or killed, depending on the player's choice.

During the mission "Spare the Rod, Spoil the Bandit", he is seen holding a woman hostage at Ridgewood Farm.

Harry can most often be found around Thieves' Landing, frequently loitering inside the saloon and around the brothel. He can also be encountered at the Pike's Basin gang hideouts, but he will be hostile unless the player is wearing the Bollard Twins Outfit.

Harry also participates in holding the player up in the random encounter "Beauty and the Wagon". He is the leader of the muggers who tells the player to give up his money or face the consequences. The player can either kill him or let him take the money and avoid a gunfight.

Harry, along with Pinky Wilson and Charlie Mash can be found hanging a person in the "Hanging" random encounter .

Promotional image depicting Dobbing about to be executed by John Marston.

Harry leading the Bollards in a Beauty and the Wagon.

Harry hanging around the Gunsmith in Thieves' Landing. 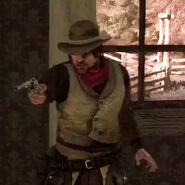 Harry with a Cattleman Revolver 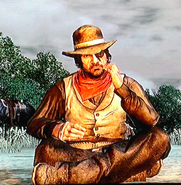 Harry at a campfire.

Harry during "Assault on Fort Mercer". 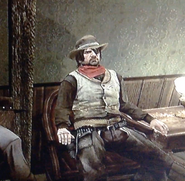 Retrieved from "https://reddead.fandom.com/wiki/Harry_Dobbing?oldid=382065"
Community content is available under CC-BY-SA unless otherwise noted.