Nothing is known of Harvey's background. He has a relative, Kit Skaggs, buried at Blackwater cemetery.

Harvey can be seen during the mission "Justice in Pike's Basin", in which he is among the ranchers being held captive by the Bollard Twins Gang. Along with Marshal Leigh Johnson and his deputies, Jonah and Eli, John Marston is able to rescue the captives and their stolen cattle.

Also, Harvey is among the crowd cheering for the racers in "The Sport of Kings, and Liars". At the very beginning of the race, Harvey is seen standing beside Clay Pettiford, the racing announcer.

Harvey can often be found around Blackwater, specifically in the saloon. However, he has been known to frequent both MacFarlane's Ranch, where he is wandering around Forman's Office. 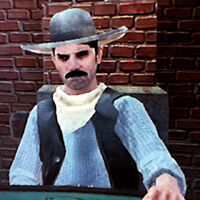 Harvey Skaggs (far right) cheers for the racers during "The Sport of Kings, and Liars."
Add a photo to this gallery

Retrieved from "https://reddead.fandom.com/wiki/Harvey_Skaggs?oldid=387778"
Community content is available under CC-BY-SA unless otherwise noted.