Help a Brother Out is a Stranger mission in Red Dead Redemption 2.

Brother Dorkins asks Arthur to investigate a nearby shop suspected of acting as a front for human trafficking.

While walking in Saint Denis, Arthur encounters a monk named Dorkins. Dorkins asks Arthur to donate money to the church, and he can either agree to donate or refuse. Dorkins will then ask him to go to the local fence, who he believes is illegally trafficking children from the Spanish isles.

Arthur enters the store and the owner greets him. Arthur can intimidate the shop owner until he reveals where the children are located. However, this will reduce the chance of getting the gold medal for the mission.

Arthur finds two kids chained against the wall, then frees the two children, who address in Spanish how grateful they are for his helping them, and brings them back to Dorkins, who offers him the option of taking money from the donation bowl for his payment. Arthur can either leave the money, or tell Dorkins to save it for someone in need. 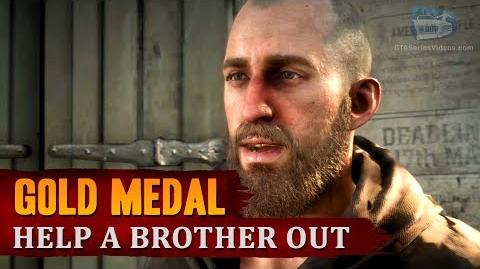 Completing this Honor/Stranger story mission strand is associated with these trophies/achievements:

Retrieved from "https://reddead.fandom.com/wiki/Help_a_Brother_Out?oldid=416631"
Community content is available under CC-BY-SA unless otherwise noted.