Town of Armadillo in Cholla Springs, State of New Austin

Herbert Moon is the owner of the General Store in the town of Armadillo in Cholla Springs, New Austin. He had a brother named Francis Moon, who died on 23 May 1897, and is buried in Coot's Chapel cemetery, with his tombstone saying he "always took a joke too far". Herbert also has a daughter named Herberta, whom he disowned after she married a Jewish man named Isaac Solomons, and dedicated herself to helping the poor instead of selling groceries.

Herbert refers to himself as Armadillo's first citizen. It's unknown if he means the most important citizen, or was literally one of the founders of Armadillo, which is certainly possible given his age.

Herbert Moon was miraculously the only Armadillo survivor of the New Austin cholera outbreak of 1907. He's implied to have some sort of connection with the Strange Man, as the Strange Man's shack has allusions to the outbreak and Armadillo, and Herbert himself keeps the Strange Man's portrait hung in his store. John Marston states that the man in the picture looks familiar and asks about it, with Herbert simply shrugging it off.

As the owner of the General Store, Herbert Moon will sometimes appeal to the player to help intervene after being robbed by an outlaw. Additionally, the player has the opportunity to rob and/or kill Herbert Moon themselves.

Herbert Moon can be found working behind the counter in his shop or playing poker in the back room at the Saloon in Armadillo. Around night-time, when he is not playing poker, he can often be found drinking in front of his shop. 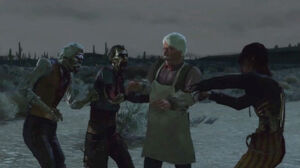 In Undead Nightmare, during the survivor mission "Dinner for Two", John walks into the General Store and asks Moon if he has seen Jonah or Eli. Moon asks if they are Jews (since their names are generally common Jewish names), before going on a rant about the infection, blaming every ethnic minority (Jews, Catholics, Natives, the British, and homosexuals, among others) for causing it. John, realizing that Moon is of no help, comments on how remarkably hate-filled he is before walking outside as Moon follows. Moon asks John if he wants to join him in his fight. John refuses, and Herbert goes on his own to stack crates outside, but is quickly assaulted by three Undead. While being eaten, he shouts, "You can't eat me! I'm Herbert Mooooon!" while John looks on, with a smirk on his face. Afterwards, Herbert Moon comes back as a fresh Undead, and the player may kill him, hogtie him, or flee.

Moon is notable for his constant and unabashed anti-Semitic rhetoric, often greeting his customers by asserting that nothing in his shop is Jewish-made, how he considers everything he says to be perfectly correct, and his over-the-top sense of pride and confidence, made evident by the way he says his name almost every time he talks to the player. Herbert Moon can be heard accusing "the Jews" of various nefarious plots and influences, like controlling various companies and agencies, even being responsible for the death of President Abraham Lincoln.

Herbert is a middle-aged man with neatly middle-parted hair that has begun to gray along the top, along with his mustache. Along with large spectacles, he wears a pinkish vest with an apron over it, and also sports a red bow tie. He is notably healthy-looking, especially when compared to his sickly peers in Armadillo.

By 1911, Herbert has aged slightly, but his overall appearance is generally unchanged. His hair, now balding, and his mustache, which is significantly bushier, have gone completely white. Moon has also gained weight slightly, and his new glasses are smaller and more worn-looking than the pair he had in 1907.

While in a duel, Herbert bears a gun belt and holster containing a Cattleman Revolver. 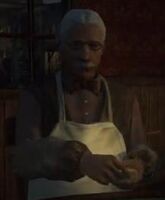 Moon at the Poker table

Moon as he appears in Undead Nightmare

Moon serves Marston as he purchases some supplies

Herbert in his general store in Red Dead Redemption 2