Herman Zizendorf was born in Germany and later immigrated to Blackwater. Zizendorf became a thief and began stealing construction tools, and was subsequently given a bounty of $30 by the Blackwater Police Department for fraud, deceiving an officer of the law, and multiple counts of theft.

John Marston can accept the bounty and is asked by Chief Dunbar to bring in Zizendorf alive. Upon discovering Zizendorf, a chase begins, during which Zizendorf injures his leg. John ultimately captures Zizendorf and brings him back to the station, who begs John not to. In a final attempt to escape, Zizendorf rants about how it was a mistake he was arrested and that he can have John arrested for assault, before he is incarcerated in a cell. 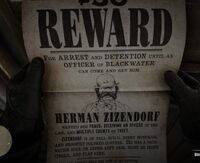