The Hermit is a minor character featured in Red Dead Redemption 2.

He can be found living at Manito Glade, a homestead north of Annesburg. If the player comes close to his cottage, the Hermit will shout obscenities at them, warning the protagonist to leave, while threatening them with the Rare Shotgun. The hermit will fire at the player if they come any closer.

The Hermit doesn't appear to be a friendly person, nor a sociable one. He has no hesitation to show his hostility towards the player, when the latter approaches his cabin.

The Hermit is a middle-aged western man. He has a long, dark moustache. His outfit consists of a large hat, a beige shirt with a red tie, and black work pants.

The Hermit looks considerably older in 1907 than he does in 1899, with greyer complexion and more aged skin. He is dressed in a red shirt with a yellow tie and blue jeans. 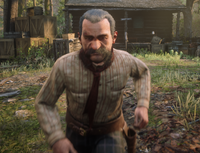 The Hermit attacking the player

Hermit out of his cabin

A closer look at the Hermit

A closer look at the Hermit in the Epilogue

Arthur's drawing of the Hermit

John's drawing of the Hermit