Pistol Ammo
“Oh, Mr. Marston, one more thing. This is for you.”

“See, I have nothing but your best interests at heart.”

The High Power Pistol is a weapon featured in Red Dead Redemption.

The High Power Pistol is one of three semi-automatic pistols in the game, along with the Mauser Pistol and Semi-automatic Pistol. It is statistically one of the best all around handguns in the game, being the most powerful, with a high rate of fire, quick reload, and eight round capacity. It is also one of the last weapons to be unlocked in the single player campaign.

This weapon was very uncommon during the game's era. It is a "gift" to John Marston from Edgar Ross, so it fits in with the theme of the encroachment of modernity in the West, and Ross' support of modern technology.

In Single Player, the weapon is given to John Marston by Edgar Ross in the opening cutscene of the story mission "Bear One Another's Burdens".

One of the Random Encounters in the wilderness during Undead Nightmare involves a doctor who is conducting experiments on undead corpses in an attempt to find a cure for the disease. After assisting the doctor in four to six separate encounters, he will provide the player with a High Power Pistol. 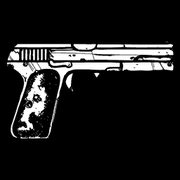 Edgar Ross and his High-Power Pistol.

High Power Pistol Render.
Add a photo to this gallery

The High Power Pistol can be used to unlock the following achievements or trophies:

Retrieved from "https://reddead.fandom.com/wiki/High_Power_Pistol?oldid=396928"
Community content is available under CC-BY-SA unless otherwise noted.