Hobart Crawley was a Confederate Major who fought in the American Civil War. He is a part of the American upper class in Saint Denis and is considered a hero by the populace of Lemoyne, at least according to Angelo Bronte.

Crawley attends the mayor's party during the mission "The Gilded Cage", where he is pointed out by Angelo Bronte to Dutch van der Linde and Arthur Morgan. He is degraded by Bronte for his young wife, claiming it to be against "the natural order of things". He is later seen discussing the ethics of law and order with Dutch and Heston Jameson, the head of Sisika Penitentiary. Both Hobart Crawley and Heston Jameson have stricter and more authoritarian views on the subject compared to Dutch, who has much more liberal ideas. After the conversation, Hobart Crawley expresses how he dislikes Heston Jameson, who can be heard saying the same thing about Crawley.

Crawley is shown as an overweight old man with grey, right parted hair and a small nose. In his only appearance he is shown on a black suit with a green vest decorated in gold buttons and a chain along with a single red medal on his chest.

Statue dedicated to Hobart H. Crawley and the men under his command in Rhodes 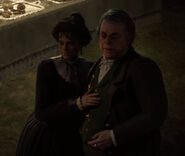 Hobart Crawley with his wife Brenda