N/A
Honor, Amongst Thieves is a mission in Red Dead Redemption 2.

Colonel Henry Favours is redirecting smallpox vaccine away from the Wapiti Indian Reservation to punish the Wapiti Indians for the recent unrest. Captain Lyndon Monroe requests Arthur's help to steal the vaccine from the U.S. Army.

After promising to help Captain Monroe, Arthur goes to the Wapiti Indian Reservation to meet him. When he does, Monroe tells him that he was supposed to oversee the administration of the vaccines, but that Colonel Favours is deliberately withholding them and, as a result, the Wapiti Indians are suffering from illness on the reservation. Disgusted by the sight of gravely ill adults and children alike all around him, Arthur decides that they should steal the vaccines back from the US Army. Monroe is initially hesitant and says that they must "act with due caution" but eventually complies, and the two depart from the reservation.

On the way, Captain Monroe tells Arthur that the vaccine has been redirected to Valentine, and that they could intercept it in Cumberland Forest. He also talks about Colonel Favours, and how he is likely trying to incite retaliation from the Indians and therefore have a Casus Belli. He also explains that Favours himself had a very poor career in the American Civil War, and that he is an insecure man who wants one final victory before retirement. Additionally, he also says that there is a culture of scorn and disdain for the Indians in Favours' regiment, which only makes things worse.

The pair reach a ledge where they can see into the distance. Here, they see an Army wagon coming through, carrying the vaccines. With their target found, Arthur tells Captain Monroe to make himself scarce while he gets to work. Arthur rides after the wagon and manages to steal the vaccines from it, before making his way back to the reservation. Once there, he gives Captain Monroe the vaccines, who then thanks Arthur for doing this. 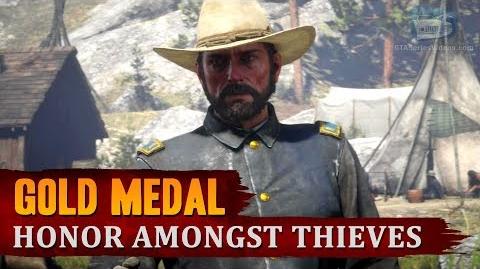 Retrieved from "https://reddead.fandom.com/wiki/Honor,_Amongst_Thieves?oldid=401204"
Community content is available under CC-BY-SA unless otherwise noted.