Horley is a central character featured in Red Dead Online.

Prior to 1898, Horley was Philip LeClerk's loyal assistant. Following Philip's death, he became the trustworthy assistant, bodyguard, and only friend of his widow, Jessica.

Horley first appears when he and two other men ambush the prison wagon holding the protagonist, who was unfairly accused of murdering Philip and incarcerated. He easily talks the guards to disarming due to their absence of leverage in the situation, before having them release the prisoners. Horley asks the protagonist to follow him after picking up the weapons that had been discarded by the guards and takes them to Jessica LeClerk's camp. There, Jessica informs the protagonist that they were framed for Philip's murder and that her husband was actually killed by Teddy Brown on the orders of Philip's business associates Jeremiah Shaw and Amos Lancing and the latter's wife Grace, who conspired to take over his business. Jessica then offers to help the protagonist prove their innocence in exchange for their assistance in her mission to avenge Philip's death, and allows them to leave, saying that she will contact them again soon. In the meantime, she has JB Cripps help the protagonist set up a camp, while Horley provides them with some work opportunities to help them get back on their feet.

Horley advises the protagonist to visit Alden Carruthers and Clay Davies for work. Later, he asks them to meet him in Blackwater, where he is accompanied by Old Man Jones, who suggests that they work for several sheriffs across the region while Horley continues to investigate the conspiracy behind Philip's murder. Upon doing so, the protagonist returns to Horley and Jones.

If the player returns with high Honor: Jones comments on the protagonist's honor, saying that they are no saint, but an honorable enough individual, and advises them to put their skills to good use by helping Tom Davies, to which Horley agrees.

If the player returns with low Honor: After Jones remarks on the protagonist's dishonorable actions and that they make an excellent choice for Horley's revenge mission, Horley claims that he doesn't judge an individual's character and tells the protagonist to seek work with Samson Finch. When the protagonist's posse arrives to meet Finch, Horley is already there, waiting for them, and formally introduces them to Finch, before leaving.

Later, Horley asks the protagonist to meet him and Jessica for the assault on Teddy Brown's gang at Fort Mercer, alongside local law enforcement and several U.S. Marshals. Jessica provides the protagonists with metal-plated armor and is anxious to witness Brown's death, but Horley advises her to stay behind for her own safety and reputation. Horley participates in the shootout with Brown's gang and leaves with Jessica once she interrogated and executed Brown, not before paying the protagonists for their help.

In the mission "These Bastards Can Fight", when the protagonist's posse arrives at Finch's shack, Horley is seen leaving. When Finch states that "these bastards know how to fight", Horley agrees and tells them that Mrs. LeClerk is grateful for their assistance so far and that they will likely be needed again soon.

Sometime later, Amos Lancing and Jeremiah Shaw invite Jessica to meet them in Blackwater. Suspicious of their intentions, she and Horley ask the protagonist and their posse to accompany them. After Jessica kills Lancing, Horley participates in the shootout with Lancing's guards, and, with help from at least one of the protagonists, retrieves some documents from Shaw that he and Lancing planned to have Jessica sign to finalize their takeover of Philip's business. Upon discovering they are forged, Horley calls Shaw a lowlife and tells him to run away, which he does. After their escape from Blackwater, Horley and Jessica are both forced to go on the run due to their recent actions. The latter promises that she will find a way to clear their names and exact revenge on Grace Lancing, the last one of the conspirators behind Philip's death left. After thanking and paying the protagonists for all their help, Jessica departs with Horley.

Horley shows himself to be a very level-headed and collected man. He is often a voice of reason and seems to also be rather persuasive, as shown on several occasions. Horley is also deeply loyal and protective of his employer, Jessica LeClerk, and seems to be her closest confidante. He is not opposed to breaking the law when needed, as he does not judge the protagonist if they choose to be dishonorable, however, he does try to avoid causing too much trouble. 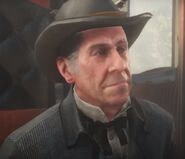