Horned Goats can be found anywhere in the wilderness. These creatures have larger horns, and darker coats than regular goats. They also have bright red eyes, hinting towards possession by a demon. Also, they do not appear to have an undead form like other animals in Undead Nightmare.

Horned Goats are impossible to kill by shooting unless the player aims directly at their heads. In Casual Aiming mode, the player automatically aims at the goats torso, which makes it difficult to kill unless in Dead-eye. They will not die by being hit by Death. Though they can be killed in one hit by the Torch from horseback.

Once dead, the corpse cannot be looted.

Horned Goats are not hostile. When shot at, the herd scatters and flees.

Horned Goats appear in large groups around the areas in Mexico where the Chupacabra can be found. They can also be found in areas further north such as Tall Trees. A large number roam in the area around Warthington Ranch. 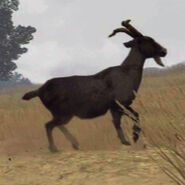