N/A
Horsemen, Apocalypses is a mission in Red Dead Redemption 2.

While planning the Saint Denis trolley robbery, Dutch notices a wave of O'Driscolls attacking the camp, but not before displaying Kieran's corpse.

Dutch asks Arthur to talk to him about the trolley robbery that Bronte tipped him off about. Arthur asks if it will be just the two of them, but Dutch tells them they'll need a third. Arthur recommends Lenny while Dutch asks why not Micah. Arthur tells him that Micah is too reckless and that they will never get along. Their conversation is interrupted when Dutch notices an odd figure riding a horse into camp at a trot. Mary-Beth screams in horror and recognizes the figure as Kieran, who has been decapitated with his eyes gouged out after he disappeared after the party following the return of Jack.

A horde of O'Driscolls then begin to invade and attack the camp. Arthur shoots at the first wave of attackers from the porch before Dutch sends him down to the front door to defend the main area of the camp. The non-fighting members rush inside the house to hide, while the rest continue fending off the O'Driscolls. However, the gang is overwhelmed by their numbers and is forced to retreat back to the house. After the front door is barricaded, Dutch assigns John, Charles, and Arthur different positions to defend. As they continue the fight from inside, Arthur hears several loud screams from outside. Recognizing the voice as Sadie's, he heads out to save her but arrives to find her killing three O'Driscolls with a Knife. They and the other gang members kill the rest of the attacking O'Driscolls, while the few survivors run away, and the mission ends. Dutch then asks Charles, Swanson, and Pearson to bury Kieran while Arthur and John clear out the corpses, but not before being told by Arthur how hateful Colm is. Arthur has an individual Diary writing cutscene, where he regrets not being able to save Kieran's life. Kieran's death has a lasting impact on the camp, notably Arthur for failing to save him, Bill because he had grown fond of him, and Mary-Beth who had implicitly fallen in love with him. 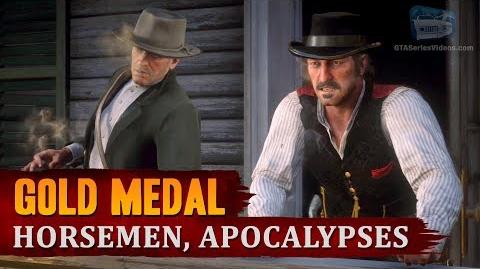