Hosea states that from early life he was "raised in the mountains" as he puts it. He also mentions his father lived a life of "sin and debauchery that would make an emperor blush" until he died at age 75. However, he did love him despite only seeing him 3 times in his life. At some point in the past, he met and fell in love with a woman named Bessie, whom he even temporarily left the gang for - she died prior to 1899. In his younger days, Matthews was a robber. According to Matthews, he and Dutch van der Linde met sometime in the mid-1870s, when both men tried to rob each other. After that event, the two became best friends, and they both founded the Van der Linde gang with Hosea being Dutch's right-hand man.

Hosea is both the most senior member of the gang and Dutch's oldest friend. Intelligent and level-headed, Hosea regularly advises Dutch and is valued for his wisdom. As much as he shares similar ideals, he appears to be much more pragmatic in his understanding of what lies in store for the gang.

Hosea is first seen riding with Dutch on the wagon in the opening cinematic. He tells Dutch that they need to find shelter and fast, he then points out Arthur up ahead. Later the following morning Abigail begs Arthur to find John, who hasn't returned in two days. After a slight argument, Hosea steps in and tells Arthur that they are all worried about him and tells Arthur and Javier to go look for him. Upon their return, Hosea tells Arthur that they plan on having to move East, which is met with extreme hesitation by Morgan.

Hosea stays behind at camp while the majority of the others are attacking a nearby O'Driscoll hideout. He later voices his opposition of robbing the Cornwall train that Dutch has set his sights on, and is absent from the robbery. He is then seen a few days later loading up the wagons, preparing to leave. Upon arriving in New Hanover Hosea and Arthur hang back to fix the broken wagon with the help of Charles Smith. He then points out the Native Americans positioned atop the ridge and tells Arthur and Charles what happened, which leads to a discussion about Charles and later, Arthur's upbringings. He later hands Arthur a Ginseng Elixir before reaching the new camp.

After setting up camp, Hosea can be seen wandering around camp, doing various activities. Later, he gives Arthur a Raven Black Shire horse and the two go out hunting in Ambarino for a "1000 pound bear". After nearly being attacked, him and Arthur either return to camp together, or they will part ways. He also gives Arthur a map of the Legendary Animals.

Soon afterwards, Hosea heads to Emerald Ranch in the hope of finding a lead. Arthur finds him talking to Seamus, who asks Hosea to prove himself by stealing a stagecoach from Bob Crawford, his “cousin by marriage”. Despite hesitation from Arthur, Hosea accepts, and the two ride to Carmody Dell. Upon arrival, the two observe that Crawford is in, and the player can decide to steal the stagecoach now, or wait until night. If they decide to do it at day, Hosea will distract Bob Crawford and his son, while Arthur loots the house and steals the coach or, if they do it at night, Hosea will steal the stagecoach and Arthur will loot the house. After commandeering the stagecoach, the two take it back to Emerald Ranch, and get paid $300 by Seamus.

After arriving at the new camp, Hosea, Arthur and Dutch go out riding, looking for a spot to go fishing. On the ride, they come across Sheriff Leigh Gray and his deputy, Archibald MacGregor, who are seen transporting Trelawny and a group of young outlaws. Soon, the outlaws escape, and Arthur recaptures them, leading to Trelawny's release at Dutch's request. If the player wishes, then Dutch, Hosea and Arthur can go fishing.

Hosea continues bartering with Catherine Braithwaite for jobs to do for her, in exchange for money. She eventually asks for the tobacco fields at Caliga Hall that belong to the Gray family. After the Braithwaites eventually see through the gang's duplicity and capture Jack, Hosea accompanies the majority of the gang in the assault against the Braithwaite Manor, in the hope of finding Jack.

Hosea attends the party at the Mayor's house. After the party, Bill grows angry that he got no good leads, but Hosea says he got a few. This includes the city bank and the riverboat heist. When Dutch later proposes capturing Angelo Bronte, Hosea objects, but Arthur casts the deciding vote against him. In preparation for the bank robbery in Saint Denis, Hosea and Abigail are tasked with causing a distraction so the other members can rob the bank. The distraction succeeds, sending off a loud explosion and a plume of smoke. However, while the remaining members of the gang are robbing the bank, Hosea is captured by Agent Milton with Abigail managing to escape. When arriving at the bank Milton holds Hosea hostage outside the bank, proclaiming to Dutch that he has given them enough chances. Milton then shoots Hosea in the chest, killing him, and saying to Dutch that Hosea's death is their deal.

Both the bodies of Hosea Matthews and Lenny Summers (who also died in the robbery) were eventually recovered by Charles and the remaining gang during the absence of Dutch, Arthur, Micah, Bill and Javier in Guarma. They were buried together in Bluewater Marsh.

Hosea is an intelligent outlaw in touch with his wits, having worked as a con-artist and a thief for over two decades. He appears to be a slick talker, using his brains to get into and out of any situation in hand. Unlike Arthur or Dutch, Hosea prefers not to use violence as a means of obtaining money. Instead, Hosea often resorts on elaborate schemes to swindle people out of their money, playing a character to distract and disarm those he is trying to rob. However, Hosea is willing to resort to violence when he feels that it is warranted, such as when he killed a man who tried to rob him[1], when he pulls a gun on Bill and threatens him[2], and when he participated in the assault on Braithwaite Manor.[3]

Having known each other since at least 1877, Hosea became Dutch's right-hand man and closest friend over the duration of two decades of association. By 1899 he appears to be Dutch's most trusted lieutenant, with only Arthur Morgan rivaling if not surpassing him. Over the course of the game, his relationship with Dutch is somewhat tested, as Dutch's increasing brashness and violence begin to clash with Hosea's preference for non-violence.

Like Dutch, the gang seems to view Hosea as a sort of fatherly figure. Hosea is one of the few members of the Van der Linde gang that seems to be respected by all of its members.

He is a Roman Catholic.

By 1899, Hosea is a lean, elderly man with neat, silver hair cut short and a clean shaven face. In hotter temperatures, Hosea wears either an orange or a striped blue vest over a shirt which is faded blue or plain white, as well as black trousers tucked into embossed, brown leather boots and with a faded red neckerchief and an either black or navy blue hat. In more temperate climates, he can be seen wearing a buttoned dark green coat and, while he is in Colter, Hosea wears a thick brown coat and a stripy scarf loosely hanging around his neck.

For the mayor's party and the bank robbery in Saint Denis, Hosea wears a white shirt, a dark blue waistcoat and a black jacket with a black bow tie. In terms of weaponry, he owns two custom Cattleman Revolvers with bone grips and steel frames, both of which are in a reverse position in their holsters with the grips pointing forwards, designed for a cavalry draw.

Hosea, without his hat, standing next to Dutch.

Hosea, holding a lantern between Dutch and Arthur, in his coat. 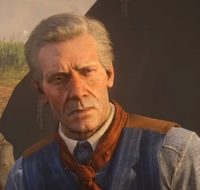 Hosea in his normal clothes
Add a photo to this gallery 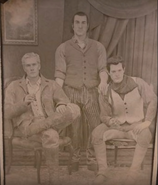 A young Hosea with Dutch and Arthur 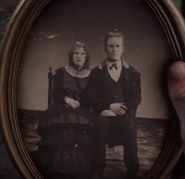 Retrieved from "https://reddead.fandom.com/wiki/Hosea_Matthews?oldid=364797"
Community content is available under CC-BY-SA unless otherwise noted.