“Edgar Ross? No, but well knew of him. Fine man if you wanted results. Won himself a chest full of medals. I think he went and retired about a year ago. Last I heard him and his wife moved out to a cabin on Lake Don Julio. Lucky guy, getting to take it easy. Beats fighting crime in this dump, that's for sure.”

Howard Sawicki is a minor character and Stranger featured in Red Dead Redemption. He appears in and gives the player the Stranger Side-mission "Remember My Family".

Howard Sawicki is an agent of the Bureau of Investigation stationed in Blackwater. Not much else is known about him. He claims that he has never worked with Edgar Ross, but despite this, he knows a lot about the man, including where he currently lives in retirement. However, this information can also be found in a newspaper article.

Jack Marston meets Sawicki in Blackwater and tells him he has a package for Edgar Ross. Howard believes him and tells Jack about Edgar Ross, including where he lives. Afterwards, he is not seen again. 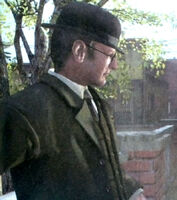 Retrieved from "https://reddead.fandom.com/wiki/Howard_Sawicki?oldid=397431"
Community content is available under CC-BY-SA unless otherwise noted.