Nothing is known of Hugo's background.

Hugo can be seen walking around Casa Madrugada, often waiting for the train. He can also be found doing a variety of odd jobs around Chuparosa. While normally encountered in Nuevo Paraiso, he can sometimes be seen at Manzanita Post.

Hugo is also a stagecoach driver. 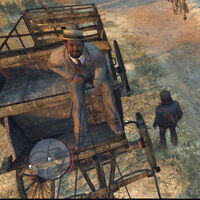 Hugo Regalado waiting for a stagecoach fare in Las Hermanas.