watch 00:35
What is Hungarian Half Breed?
Do you like this video?
Play Sound

The Hungarian Half-bred is a horse breed featured in Red Dead Redemption.

Described as a "white horse" the Hungarian Half-bred possesses a pale grey fur and a dark muzzle, as well as having pale mane and tail.

The Hungarian Half-bred is unlocked at level 33 in multiplayer.

In the Stranger side-mission "Love is the Opiate," the player must bring back a Hungarian Half-bred to the foreman. The man describes it as "a white stallion which real cowboys ride".

A deed for this horse can be purchased at any General Store for $1500 ($750 with high enough Honor, or low enough honor at Thieves' Landing) after the player has successfully broken the horse at least once.

As deeds are not single-use items, the player can use a deed as many times as they like, and it will still remain in their inventory. Usage of a deed will allow Marston to respawn his horse in the event it is killed or if the player wishes to switch horses.

The Hungarian Half-Bred is most often found in Mexico.

The Hungarian Half-Bred rarely spawn in Two Crows near Armadillo, but one or two were found. but on an extraordinary occasion, one was found in Tall Trees, on the grassy area in the north of Manzanita Post. Also, it appears just in the west of Punta Orgullo. Another possible location is around Odd Fellow's Rest.

A Hungarian Half-bred being tamed

Location of the side-mission "Love is the Opiate" 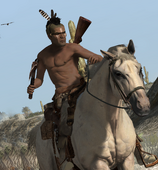 Zhou on a half-bred
Add a photo to this gallery

The player is required to tame a Hungarian Half-bred to complete the following achievements/trophies:

Retrieved from "https://reddead.fandom.com/wiki/Hungarian_Half-bred?oldid=394886"
Community content is available under CC-BY-SA unless otherwise noted.