Red Dead Wiki
Register
Don't have an account?
Sign In
Advertisement
in: Mounts in Online, Mounts in Redemption 2
English

The Hungarian Half-bred is a horse breed in Red Dead Redemption 2. They tend to have higher health and stamina, but lower speed and acceleration. Its handling gives it moderate reactivity and agility.

Hungarian Half-breds are courageous war horses, renowned for their fearlessness. This makes them a good choice to have in combat, although it should be noted that this breed does not have as much health and stamina as other war horses. The Dapple Dark Grey variant can be bought at the stables in Valentine, while others must be tamed in the wild. They are healthy and possess average stamina, speed and acceleration.

Originally bred for competition, the Hungarian Half-bred exhibits strength and stamina prized by many. Fine for sports or on the battlefield, they are quiet and eager to learn, alert and attentive. Their withers are well defined, the head alert, the limbs strong and muscular, and the hindquarters rounded and powerful. The Hungarian Half-bred is a quality war horse with a high level of strength.

The horse of John Marston throughout most of 1899. This horse first appears at Horseshoe Overlook after John's previous horse was killed by wolves in the snowy mountains of Ambarino. Old Boy has a "Silver Dark Bay" coat and is one of the few horses to not get skittish when the player approaches it. In the mission "Red Dead Redemption", Old Boy is shot dead by Pinkertons along with Arthur's horse, forcing Arthur and John to continue on foot. 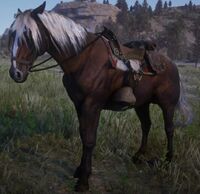 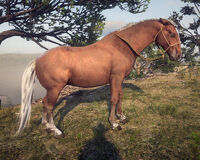 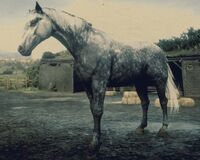 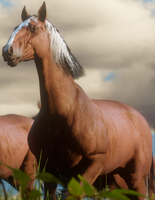 A Flaxen Chestnut in the wild 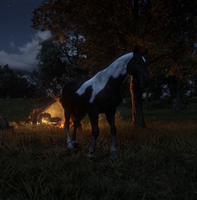 A Piebald Tobiano in an NPC camp at Dewberry Creek