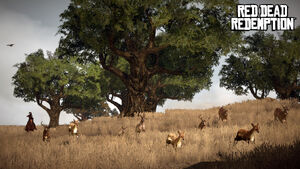 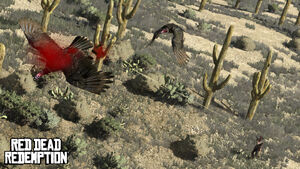 Hunting plays a very prominent role in Red Dead Redemption and Red Dead Redemption II. The player can hunt all featured animals (with the exception of the bats that fly over Tumbleweed every evening) for sport and money, but killing animals may also be necessary for survival, as many of the animals found in the world, such as bears and cougars, can easily kill the player in only a few hits. Successful completion of Master Hunter: Rank 10 allows the creation of Vittles after skinning an animal.

The hunting in the game can involve stalking, advancing upon the targeted animal, and finally making the kill. This system makes the game very similar to the actual sport of hunting. Animal bait can be bought from merchants at stores to attract various animal species. Skinning an animal allows the player to acquire material from the animal, which includes furs, skins, carapaces, hides, teeth, pelts, claws, fangs, feathers, meat, hearts, tusks, antlers and horns.

These resources can then be sold to merchants for various prices in various places; this is considered by many to be one of the fastest sources of gaining money as it can allow the player to gather hundreds of dollars worth of resources within minutes, and does not require waiting for an event to be available, such as bounty hunting. When the player skins an animal, Marston can be seen crouching in front of the animal. He will then take out his knife, and begin to skin the animal, using up to three different cuts, depending on the size of the animal. After initiating the skinning process, an animation of John Marston cutting while blood splats on the screen, shows. It is also possible to achieve a slightly higher camera angle (although the animal will still be out of view) if the player crouches before initiating the skinning animation.

Animals are randomly generated in the wilderness and can sometimes assault the player, his allies, and his horse, requiring intervention. Marston will sometimes encounter strangers screaming for help as they are pursued by some type of predatory animal, such as a wolf or bear. Eliminating the pursuing animals (and therefore saving the stranger) will grant Marston money and fame. Additionally, hunting at least one of every wild animal species in the game will earn the player the Unnatural Selection trophy/achievement.

After a kill, vultures may appear, opening up the sharpshooting challenge. Completing this and other challenges will earn the player fame, and can unlock outfits for Marston. The blood of any animal will act as bait for predators, so when an animal is killed, keep a lookout for wolves, coyotes, cougars, bears or any other animal likely to scavenge. This also means that never-ending waves of animals may appear. If you kill a pack of wolves a new pack of wolves will appear shortly after, the same will keep happening, only with less time between each individual wave. But beware, if you hunt too close to a town or settlement, you will soon have a bounty on your head and the law chasing after you.

There are 36 different (not including legendary) animals that can be encountered in Red Dead Redemption and any of the listed animals can be hunted. Different animals supply the player with different pelts, claws, meat and other resources with different values, which can be sold. Killing some animals may not please their owners or the townsfolk. Slaughter of an owned horse or a domesticated dog is a crime and, if witnessed, will result in a bounty. This is considered "Animal Slaughter." Being seen killing cattle will also place a bounty on the player, called "Livestock Slaughter."

These animals all interact throughout the wild in a carefully crafted ecosystem. For instance, the player could be traversing the plains and see a herd of buffalo grazing, or while traveling through a forest, one may encounter a cougar hunting an elk, or a grizzly bear defending its territory from a pack of wolves. Each animal behaves differently; however, they can generally be placed within one of two categories: passive and aggressive.

Passive animals are harmless to the player, and will usually flee at any sign of danger or if the player gets too close and is detected by the animal. Tamed animals such as broken horses or farm cattle will not flee but will still move away slightly due to a sense of personal space.

Aggressive animals will attack the player either as prey or because they feel threatened, they are usually predatory, exceptions include the boar, the bull. Beware of these animals even when dead, as it is rare to encounter an aggressive animal traveling alone; for example, wolves always travel in packs but some animals like coyotes will travel alone but even though they don't usually attack don't let that fool you because they will occasionally attack.

Some animals only exist on one side of the US/Mexican border. This means that Marston's kills can fetch a higher price on the other side. This also applies to animals found only in West Elizabeth.

When hunting small game (birds and small mammals) it is advisable to use a smaller caliber gun (Repeater Carbine or Cattleman Revolver). If too large a weapon caliber is used, the animal being hunted has a tendency to explode in a red shower of blood, leaving no remains to be harvested (e.g. shooting a beaver with a shotgun will not produce any skinnable remains).

It is useful to use a horse when hunting large or more dangerous animals (e.g. bear, cougars, elk, wolves etc.) Horses can allow you to chase the fast herbivores as well as giving the powerful predators a run for their money.

The Hunting Knife is always described as a lesser weapon, but can be very useful while hunting, as it provides a silent kill. This is good to use on horseback. It is also the tool used for skinning. Throwing Knives are useful too, as they provide a silent short distant kill and can kill with one or two throws.

Bait is a very useful tool, as it attracts a large group of animals in the vicinity. But be warned: a group of bears or other fairly dangerous animals may come after the player. Usually when using bait, you mainly get wolves or coyotes in the vicinity, so these animals usually scare away your desired animal of finding.

The player can also use dogs when hunting. This may or may not be a more useful way. Mainly at MacFarlane's Ranch or Manzanita Post there will be collie type dogs roaming around. Whistle near them and they will follow you. Once you leave the area the area they should go ahead and start tracking animals. If they find something they will begin barking and sprint off in the direction toward the animal.

These Trophies/Achievementsinvolve the hunting and/or skinning of animals: