The Hunting Knife is a practical and widely available weapon and survival tool in the American west. It is distinct as having a large, straight fixed-blade and a wide hilt. It is a commonly used weapon and tool.

In Red Dead Redemption, Marston carries a large Hunting Knife with him at all times, and uses it for melee combat, skinning animals, and to free hogtied NPCs.

Although it is one of the weapons Marston can possess, players cannot "cheat" for it because the player begins the game with it.

Marston can use his Hunting Knife to engage in melee combat with enemies. The player can block most animal attacks with the knife as well (using R1 on PS3 or RB on Xbox) . This is crucial in fighting powerful and deadly animals such as cougars.

Also, by crouching, it is possible to do a stealth kill with the Hunting Knife; additionally, it is possible to slit the throats of hogtied captives (must be crouching with the knife out). A similar attack can be used on unsuspecting, sleeping victims by pressing a button prompt near them. You can also slit the throats of people normally; This can be done by following victims from behind while aiming with the knife (Left Trigger for Xbox 360, L2 for PS3) for a few seconds and then hitting the fire button (Right Trigger for Xbox 360, R2 for PS3). The Hunting Knife can also be wielded on horseback. The player slashes to the left and right sides of the mount. This is especially useful for hunting predatory animals such as the cougar and bear, and for completing Master Hunter Challenges . A running gallop can allow the player to strike the foe and move out of harm's way quickly. If the player is struck, the mount may be killed, but the player can still recover without being killed, but with the chance of getting hit. It's also a very good weapon for fighting packs of wolves, both on foot and on horseback. The knife is also a very powerful weapon in hardcore multiplayer.

Marston is very proficient with his Hunting Knife; he can use it to skin and process any animals that he hunts, allowing him to obtain furs, pelts, teeth, horns, hearts, and other animal products, which can later be sold to merchants for cash. 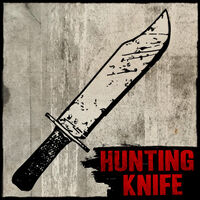 One way to use the Hunting Knife 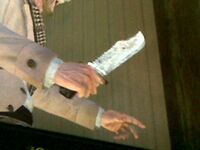 Marston uses his Hunting Knife to fight a bear.

Madam Hernandez skins an animal.
Add a photo to this gallery

The following trophy/achievement can be acquired in Multiplayer when using the Hunting Knife:

Retrieved from "https://reddead.fandom.com/wiki/Hunting_Knife?oldid=308348"
Community content is available under CC-BY-SA unless otherwise noted.