N/A
Icarus and Friends is a mission in Red Dead Redemption 2.

Sadie's contact, Arturo Bullard, agrees to take Arthur in his hot air balloon to scout out the Sisika Penitentiary.

To start this mission, Arthur goes to Doyle's Tavern in Saint Denis to meet Sadie, in order to discuss how to rescue John Marston from Sisika Penitentiary. She tells Arthur about her plan - a hot air balloon, to scout the prison from above to make sure John is actually still there. The hot air balloon owner, Arturo Bullard says that Sadie can't go, citing that flying messes with a woman's "vapors".

Arthur gets into the balloon and is put in charge of controlling it. Eventually, he reaches the penitentiary, and in the field to the east, Arthur spots a prisoner who he thinks is almost certainly John. Immediately afterwards, the guards begin shooting at the balloon, and Arthur will fly away, out of the guards' reach.

On the way back, Arturo Bullard sees Sadie on horseback, getting chased by a gang of O'Driscolls. Arthur gives Bullard control over the balloon while he begins shooting at the O'Driscolls, in an attempt to save Sadie. At some point during the skirmish, Bullard gets hit, before being shot again a few seconds later, causing him to die and fall out of the hot air balloon. After this, Arthur has to avoid a bridge that is in the way; he rises above the bridge before lowering the balloon, in order to allow Sadie to climb onto it. Arthur continues trying to make the balloon rise, but it runs out of fuel and crashes on the bank of a river. Both Arthur and Sadie emerge fairly unscathed from the crash, but they are assaulted by a large group of O'Driscolls from across the river. After this, more O'Driscolls emerge from the woods, but they are also gunned down by Arthur and Sadie.

After the O'Driscolls have been eliminated, Arthur reprimands for Sadie for recklessly and unnecessarily pursuing O'Driscolls when she didn’t need to. In response, Sadie changes the subject and asks Arthur whether he saw John, to which Arthur confirms that he did see John. Before the player leaves, Sadie tells Arthur something else: Colm O'Driscoll has been captured and sentenced to hang. While Arthur is initially dismissive, saying that he had escaped the previous two times, Sadie tells him that she intends to make sure that he doesn’t escape a third time. 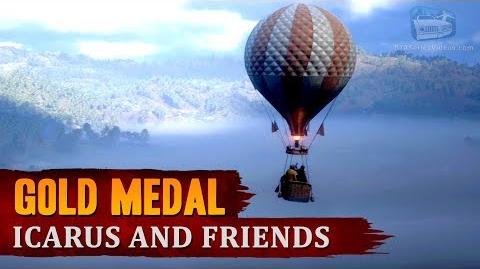 Retrieved from "https://reddead.fandom.com/wiki/Icarus_and_Friends?oldid=411151"
Community content is available under CC-BY-SA unless otherwise noted.