"Irish" is a major character featured in Red Dead Redemption.

With the addition of the Liars and Cheats DLC pack, Irish is also a multiplayer character model that may be selected in the 'Damnation' section of the Outfitter.

According to Irish, he grew up poor and hungry. When he was around fourteen years old, he immigrated to the United States. During his boat ride to America, he met and befriended two other immigrants, French and Welsh. In Irish's words, they became "as thick as thieves" ever since.

Irish is one of the supporting characters in the first chapter of Red Dead Redemption. His help was suggested to Marston by Nigel West Dickens as the man who could get Marston heavy firepower and ammunition from a Gatling Gun. After saving Irish from two of his "friends", and rescuing his friend Shaky, while also carrying out other errands, he will "help" John take over the hideout of Williamson in Fort Mercer. However, when the battle starts in Fort Mercer, he is nowhere to be found until just before the mission is finished. His excuse: "I awoke with me head in a pair of tits and it felt ill-mannered not to get reacquainted with them." In the mission "We Shall Be Together in Paradise," however, Irish provides John with a raft to Nuevo Paraíso and accompanies him, even if he cowers while they're under fire.

After parting ways with John in Nuevo Paraíso, Irish is never encountered again. In 1914, the "miscellany" section of the Blackwater Ledger states that an "Irish male, of unknown name, came to his death by the accidental discharge of a gun in a Thieves' Landing outhouse."

Irish is a dysfunctional alcoholic known to greatly exaggerate, and tell tales of which he seldom remembers the finer details. When John Marston works alongside him, he often does the work while Irish is nowhere to be found, further perpetuating his reputation as a lazy drunk and a coward. 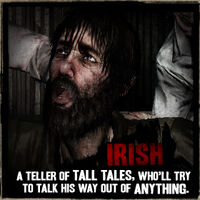 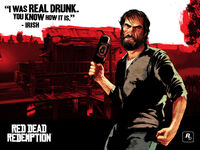 "You got it all wrong, Welsh. All wrong. It was French, I promise. He said he was going to rip you off, now he's ripping me off."

"I can't thank you enough for taking care of those two degenerates..."

"Gives me the memory of a newborn babe, as innocent as can be."

"I thought they was doxies."

Irish in 'On Shaky's Ground'.

"Shaky's made the arrangements and he'll-... shhh!"

"Half-even, Shaky. You still owe me them morphine pills to calm your nerves, Shh-shh-shh-Shaky."

"Oh, i'll take you there, John. I'm real popular down there. You just meet me at the ferry. I've got lots of friends down South."

"I've got more friends than you could shake a stick at, should you so desire."

"We just get on me raft here and let the current sweep us away to paradise."

Inspecting the "health" of the horses

"I played Three Card Stud with him... or was it Four Card Monty?"

"You're an angry and a feck-ugly man, but not a bad one."

Beta mission "We Shall Be Together in Paradise". Note that John is wearing the U.S. Marshal Outfit, which is not possible in-game.