The Jackalope is a rare animal found in Red Dead Redemption as part of the Hunting and Trading Outfits DLC pack. The player must kill one of these animals in order to unlock the Expert Hunter Outfit.

The Jackalope is a mythical animal of North American folklore (a so-called "fearsome critter") described as a jackrabbit with antelope horns or deer antlers and sometimes a pheasant's tail and hind legs. In game it is a brown, normally-sized rabbit with deer-like antlers almost the same length as its body, which moves with a sped-up version of the regular rabbit hop animation; it is faster than an ordinary rabbit, but otherwise unremarkable, possessing no offensive capabilities or additional toughness.

The Jackalope can spawn anywhere that rabbits are capable of spawning; these are low, grassy areas such as the plains around Armadillo, and include Hanging Rock, Gaptooth Ridge, Hennigan's Stead, Stillwater Creek, Rio Bravo, MacFarlane's Ranch and Pacific Union Railroad Camp. There appears to be a random chance of any rabbit spawned by the game being a Jackalope, since even the group of rabbits eating Bonnie MacFarlane's crops in "New Friends, Old Problems" have been known to include a Jackalope. As such, there are no specific locations where a Jackalope is guaranteed to spawn, and the best way to find one is to find an area with a large number of rabbits.

Jackalopes will only spawn if the Hunting and Trading Outfits DLC is installed. Upon skinning a Jackalope, a viewable number under Collectibles in the "Stats" section of the menu is shown. 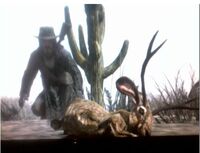 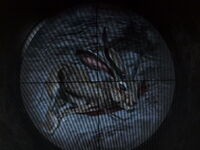 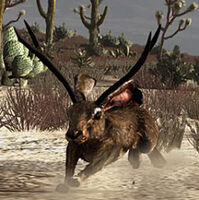 Add a photo to this gallery
Retrieved from "https://reddead.fandom.com/wiki/Jackalope?oldid=273463"
Community content is available under CC-BY-SA unless otherwise noted.