–Jailbird trying to get Marston to shoot Jonah

Jailbird is a minor character in Red Dead Redemption.

The reason he has been thrown in jail is unknown, but it seems as if he's been there for some time judging by the tally marks on the wall behind him. Whether the hashes mark days or weeks is unknown.

The player never really interacts with him, but he does try to convince John Marston into shooting Jonah during their misunderstanding at the beginning of the mission "Political Realities in Armadillo" 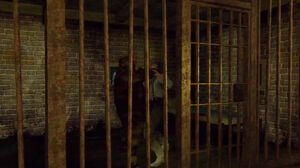 Again, there is no player interaction, but he is killed by Marshal Leigh Johnson after being attacked by a bruiser that is locked in the same cell with him.

Retrieved from "https://reddead.fandom.com/wiki/Jailbird?oldid=382569"
Community content is available under CC-BY-SA unless otherwise noted.